Many people who have spent time studying pneumatology (theology of the Holy Spirit) and the gifts of the Spirit will probably be aware of Wayne Grudem’s works on the said topic. Especially our reformed brothers and sisters. Grudem believes the charismata gifts of 1 Corinthians 12 still exist today. He is one of  many ‘theologically-minded’ and scholarly Christians advocating these particular gifts of the Spirit. Others are Sam Storms, John Piper, Gordon Fee, Mark Driscoll, Jack Deere, etc. 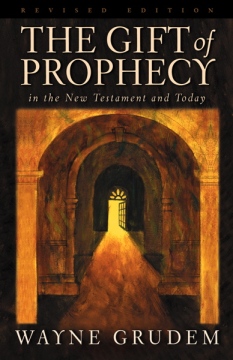 Though one can get a taster of his theological stance on the gifts of the Spirit in his Systematic Theology (pgs1016-1088), another of his writings, The Gift of Prophecy in the New Testament and Today, gives a much more in-depth treatment to the gift of prophecy, as you would expect from such a title.

Though the book can be viewed as an evangelical stalwart for study on the gift of prophecy, I believe his work fails on a few accounts, which includes the nature of apostles and prophets. In short, I think Grudem offers a faulty exegesis on Eph 2:20 and 3:5. You can see his discussions in chapter 2 of the book (pgs45-47), as well as in his Appendix 6 (pgs329-436). [As a side note, this is in the revised edition from 2000. I don’t believe earlier copies have Appendix 6.]

Before analysing some of his words, let’s quote the two New Testament passages under consideration. I shall give a little bit of context around these verses up for discussion:

19 So then you are no longer strangers and aliens, but you are fellow citizens with the saints and members of the household of God, 20 built on the foundation of the apostles and prophets, Christ Jesus himself being the cornerstone, 21 in whom the whole structure, being joined together, grows into a holy temple in the Lord. 22 In him you also are being built together into a dwelling place for God by the Spirit. (Eph 2:19-22)

4 When you read this, you can perceive my insight into the mystery of Christ, 5 which was not made known to the sons of men in other generations as it has now been revealed to his holy apostles and prophets by the Spirit. 6 This mystery is that the Gentiles are fellow heirs, members of the same body, and partakers of the promise in Christ Jesus through the gospel. (Eph 3:4-6)

What does Grudem teach from these Scriptures about New Testament apostles and prophets? The two bullet points below are a summary of his thoughts:

In discussing the two Ephesians texts, Grudem gives four possibilities of how to understand the roles of apostles and prophets in the New Testament. Those possibilities are below, with the emphasis being his own:

Grudem goes on to state:

After considering these views…it seems best to me to conclude that Ephesians 2:20 has meaning 4, that the church is “built upon the foundation of the apostles who are also prophets,” and Ephesians 3:5 should be understood to mean that the mystery of the Gentile inclusion in the church “was not made to the sons of men in other generations as it has now been revealed to his holy apostles who are also prophets by the Spirit.” (p46)

But such a view seems quite contrived to prove his own point. For starters, in every other place outside of Eph 2:20 and 3:5, apostles and prophets are actually distinguished from one another. The two main places we see this distinction are:

11 And he gave the apostles, the prophets, the evangelists, the shepherds and teachers, 12 to equip the saints for the work of ministry, for building up the body of Christ, 13 until we all attain to the unity of the faith and of the knowledge of the Son of God, to mature manhood, to the measure of the stature of the fullness of Christ (Eph 4:11-13)

28 And God has appointed in the church first apostles, second prophets, third teachers, then miracles, then gifts of healing, helping, administrating, and various kinds of tongues. 29 Are all apostles? Are all prophets? Are all teachers? Do all work miracles? (1 Cor 12:28-29)

One other major point Grudem brings up to try and prove that apostles and prophets are one group in both Eph 2:20 and 3:5 is that, in both instances, the definite article ‘the’ is found before the word apostle, but not before prophet. Thus, Paul is referring to one joint authoritative group, mainly apostle-prophets.

Theologian, Edmund Clowney, who interestingly enough used to be Grudem’s seminary professor, answers Grudem in his own work:

The absence of the article before ‘prophets’ in Ephesians 2:20 and 3:5 indicates, then, not that prophets are identical with apostles, but that they are closely linked with them since they, too, receive and communicate revelation. (The Church, p261, italics mine)

This makes perfect sense, for we see prophets carrying a very unique and important ministry amongst the body of Christ within the New Testament. Some examples are:

I’m not negating the role of apostles, nor would I even look to negate their primary role within the New Testament. But apostles never replaced prophets in any sense. They both existed alongside each other, as we find in the testimony of the New Testament itself. Prophets were foundation layers, in conjunction with apostles (hence Eph 2:20 and 3:5). Prophets were revelatory communicators, and still are.

So we can only conclude that apostles and prophets are two distinguishable ministries, yet both working together in an all-important role within Christ’s church. To clarify, this does not mean we need to add to the biblical canon, making their words the rule of faith for all time. Still, God’s Spirit utilises these ministries in relaying revelation from God. And a secondary clarifier is that this revelation adds nothing to God’s redemptive work in Jesus Christ. However, revelatory communication remains applicable in helping the church continue to walk out the purposes of God until all things are completed in Christ.

I mean, think about it. Such continued communication would make sense, for God has always been communicating outside the bounds of what is now the canon of Scripture. A couple examples would be found in places such as 1 Sam 10:10-13 and 1 Tim 1:18-19. Both tell us of revelatory prophecy coming forth which never found a place within Scripture. Prophecy, revelation, words of knowledge and wisdom, etc, were not primarily given to make sure they were added in the canon of Scripture. They were given to inform, reveal, teach, strengthen the living people of God – remember, his people being the pillar and foundation of truth (1 Tim 3:15).

So, when God speaks today, it doesn’t mean we write 4 John or 3 Thessalonians or 1 Brussels. It simply means that, as people speak forth revelation (or what they claim as revelation), we learn to weigh it against Scripture, allow to stand within the life of the historic church, keep it before the leaders we are currently connected to, keep it before the wider body we are in relationship with, and pray for discernment. It doesn’t make it 100% full-proof. But it makes us move towards becoming mature men and women of God.

In all, though I appreciate Wayne Grudem’s desire to maintain a high view of Scripture, I do not believe we faithfully accomplish this by watering down the role of prophets and prophecy within the new covenant era in Christ. This is a needed gift, even amongst imperfect people…kind of like those imperfect saints of old that we read of in Scripture.