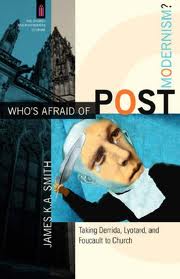 I am no philosopher, nor historian, nor scientist. I am simply a teacher-shepherd looking to help people understand God and his kingdom, especially within our world today. Still, at times, I find it interesting to engage with these fields. So this week, I have begun reading James K. A. (or Jamie) Smith’s work, Who’s Afraid of Postmodernism: Taking Derrida, Lyotard, and Foucault to Church. And I have appreciated the little I have read concerning postmodern thought in these two books: God’s Word in Human Words by Kenton Sparks and How (Not) to Speak of God by Peter Rollins.

This whole discussion around postmodernism is and has been a touchy subject within the church for the past decade, with not a few evangelicals identifying postmodernism as inherently evil.

Jamie Smith comes from a very strong reformed background, teaching philosophy at Calvin College. Yet, as a philosopher, and still knowing his theological roots, Smith takes up the challenge to show how postmodern thought is not intrinsically wrong and can actually be helpful for the church as we move forward more and more in the 21st century.

It might sound shocking to some Christians, but I think he might just be on to something here. Well, others have argued a similar thesis – Brian McLaren, Peter Rollins, Rob Bell, et al. But many a evangelicals will not turn an ear to their thoughts. Hence why Jamie Smith becomes an important voice in this discussion.

And so, in the book, Smith sets out on the path to a) explain the positives of postmodern thought and b) challenge much of the church’s assumptions about postmodernism.

Thus far, here is one thing that really caught my attention. Smith notes that a philosophical construct can shift (such as what is happening with the shift from modernism to postmodernism), but the cultural impact of such a change might take some time to flesh itself out. Thus, though many cultural phenomena are wrongly connected to postmodern thought, much of what we experience in our culture (at least our culture in the west) is actually still the outworking of a modernist perspective.

In other words, cultural phenomena tend to not (yet?) reflect the radical implications of postmodernism. This might be because postmodernism itself has shrunk back from its own implications in both intellectual and cultural spheres. The individualism and consumerism that characterize contemporary culture are fruit nourished by deeply modern roots. So also relativism owes much more to modernism than to postmodernism. (fn8, ch1, p19)

I’m not sure many have made such connections.

Thus, Smith goes on to claim:

One of the reasons postmodernism has been the bogeyman for the Christian church is that we have become so thoroughly modern. But while postmodernism may be the enemy of our modernity, it can be an ally of our ancient culture. (p23)

And his argument, from a more practical sense, boils down to this thesis:

I will argue that the postmodern church could do nothing better than be ancient [connected to the ‘well-worn paths’ of the ancient church], that the most powerful way to reach a postmodern world is by recovering tradition, and that the most effective means of discipleship is found in liturgy. (p24)

I find myself challenged that, if such is practically true and helpful, then I have a lot to learn and even see change in my own approach to theology and ministry. I suppose a postmodern culture, of which I am seated right in the heart of post-Christendom western Europe, could be reached by not going ‘ancient’. But this gives me, or us (me with other brothers and sisters), much to reflect on.

I like the book so far. As I said, I’ve touched lightly into engaging with more philosophical constructs, though I am not sure I will ever go too deep. Still, I appreciated perspectives like Kenton Sparks’ identification with the practical realism of postmodernism. And I suppose one as grounded as Jamie Smith (though I believe Sparks is just as grounded) has much to bring to the table in the realm of philosophical discourse.

4 thoughts on “Who’s Afraid of Postmodernism?”