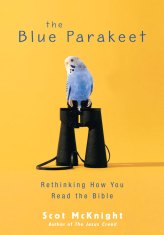 I’ve been meaning to post a review of this book for quite a while, since I read the book back in November, but am only now getting around to it.

The Blue Parakeet does not stand as a typical title for a book of a theological nature, though this is no treatise of systematic theology. And the title definitely throws you for a loop when considering the subtitle: Rethinking How You Read the Bible. Yet, as one will see by reading the book, the title does prove helpful in regards to one of the author’s main points.

The author is Scot McKnight, most notable for his book Jesus Creed. Unfortunately, I’ve yet had the opportunity to read that work, but maybe one day down the road I shall. Dr. McKnight is professor of Religious Studies at North Park College in Chicago, Illinois. You can also check out his blog, Jesus Creed.

To begin, I thought I would quote a couple of paragraphs from the intro chapter of the book:

Throughout this process of conversion and reading the Bible, I made discoveries that created a question that disturbed me and still does. Many of my fine Christian friends, pastors, and teachers routinely made the claim that they were Bible-believing Christians, and they were committed to the whole Bible and that – and this was one of the favorite lines – “God said it, I believe it, that settles it for me!” They were saying two things and I add my response (which expresses my disturbance):

Why say “hogwash,” a tasty, salty word I learned from my father? Because I was reading the same Bible they were reading, and I observed that, in fact – emphasize that word “fact” – whatever they were claiming was not in “fact” what they were doing (Nor was I.) What I discovered is that we all pick and choose. I must confess this discovery did not discourage me as much as it disturbed me, and then it made me intensely curious (and it is why I wrote this book). The discoveries and disturbances converged onto one big question:

How, then, are we to live out the Bible today?

McKnight then goes on to give a few examples of where people ‘pick and choose’:

For McKnight, topics like these, and many others, had prompted questions such as this: How do we know what to do and what not to do?

He then goes on to share a story, a story which has spurred the title of the book, The Blue Parakeet.

Scot McKnight’s backyard (back garden for Brits) had become a haven for sparrows. There are other occasional birds that come around, but the feathered species that mostly visits is that of the sparrow (as well as squirrels). He likens these sparrows to the omnipresence of God – they’re everywhere.

But one day, a unique bird of a blue tint decided to land in the yard. Lo and behold, it was a pet blue parakeet. Though one would not imagine such, this parakeet brought great disturbance to the status quo of sparrows. They did not know what to do with this intruder.

Yet, interestingly enough, after some time, the sparrows began to calm down and warm up to new visitor. Even more, after observing their behaviour for quite some time, McKnight reckons that the sparrows became really good friends with the parakeet. Quite a contrast to how things were when the blue parakeet first imposed himself as a visitor to the bird feeders.

McKnight craftily uses this story to draw a parallel between the enigmatic topics of Scripture, some of those listed above, and the blue parakeet experience. He goes on to pen these thought-provoking words:

When we encounter blue parakeets in the Bible or in the questions of others, whether we think of something as simple as the Sabbath or foot washing or as complex and emotional as women in church ministries or homosexuality, we have to stop and think. Is this passage for today or not? Sometimes we hope the blue parakeets will go away – as I hoped [in his backyard]. After all, it was just a pet. Or perhaps we shoo them away. Or perhaps we try to catch them and return them to their cage…

When chance encounters with blue parakeet passages in the Bible happen to come our way, we are given the opportunity to observe and learn. In such cases, we really do open ourselves to the thrill of learning how to read the Bible. But, like the sparrows, we have to get over our fears and learn to adjust to the squawks of the Bible’s blue parakeets. We dare not tame them.

Those are some bold and challenging words, especially the suggestion to the reader that we ask this question about what we read in the Scripture: ‘Is this passage for today or not?’

No doubt, for those who have spent their lives reading, studying and even teaching the Scriptures, our knee-jerk reaction is to claim that all of Scripture is for today! It’s all God-breathed, all God’s Word, and thus, we are called to obey all of it. Thus, in a sense, some evangelicals will probably get a tad nervous with the suggestion that we ask the question: ‘Is this passage for today or not?’. And it’s a tad understandable. And maybe McKnight’s statement does need to be qualified, explained a little more, which he does in the 229 page work.

But if one is willing to hear McKnight’s heart, hear the challenge of his words, one must be willing to ask the question he poses when reading and studying Scripture: Is this passage for today or not?

One of the themes that McKnight takes up in this intriguing work is this:

And, here’s the kicker. McKnight challenges us that we are called to carry on that pattern in our world today. To summarise his thoughts concerning such a statement, he states:

The gospel is capable and designed to strike home in every culture, in every age, and in every language. Any idea of imposing a foreign culture, age, or language on another culture, age, and language quenches the dynamic power of the gospel and the Bible. We need not become Jews to live the gospel, nor need we become first- or fourth- or sixteenth- or eighteenth-century Christians…

What we most need is not a return to the first or fourth or sixteenth or eighteenth century but a fresh blowing of God’s Spirit on our culture, in our day, and in our ways. We need twenty-first century Christians living out the biblical gospel in twenty-first century ways. Even more, if we read the Bible properly, we will see that God never asked one generation to step back in time and live the way it had done before. No, God spoke in each generation in that generation’s ways.

But to some, these words and ideas sound too subjective. But I think McKnight gives us some good stuff to chew on. I don’t think he is a proponent of Christians chucking their Bibles in the trashcan (bin) as irrelevant. I don’t think he is saying the Bible is not God’s inspired revelation to humanity. But, he is challenging us to really think through the blue parakeets of Scripture, rather than tame them or cage them or outrightly ignore them. We really need to think these things through, for the Bible has its share of blue parakeets.

In the end, McKnight spends a good 50 pages using his carefully considered hermeneutics in hashing out the debate in regards to women in ministry. I think he gave some helpful conclusions and insights for the topic. But you can judge for yourself.

In all, I would recommend one read The Blue Parakeet. By no means does it fit into the usual, traditional hermeneutical textbook. But it is noteworthy as we continually consider how to faithfully handle God’s Word in our current generation.

On a scale of 10, I would give the book an 8, for I was drawn to the nature of the book in which it challenged the traditional motto, ‘I believe we should obey everything the Bible says.’ No Christian can faithfully make such a claim. There are far too many blue parakeets we must consider.

So, how about we dive in and faithfully look at them? It’s not too late.

2 thoughts on “The Blue Parakeet”