This past week, the ESV (English Standard Translation) team at Crossway made an interesting statement about the unchangeable nature of the translation. END_OF_DOCUMENT_TOKEN_TO_BE_REPLACED

In recent weeks, I purchased and read Scot McKnight’s newest release, The King Jesus Gospel: The Original Good News Revisited. I was originally hesitant to purchase the book, believing that much of what would be said could already be found in the writings of an N.T. Wright, and possibly a George Ladd as well (and I’ve read both of them somewhat extensively). But, though there were some connections to Wright, McKnight definitely brought some fresh perspective to the table. And, as a side note, I realise there would not had been much connection with Ladd, since Ladd mainly talks about a theology of the kingdom rather than a theology of the gospel, though I personally see the 2 intricately connected.

I must admit that I do appreciate a lot of what McKnight writes. I have not read a lot of his books (though I’ve now read this one and The Blue Parakeet). But I have also followed his blog and even gave some time to listen to a recent audio dialogue with another church leader. What I really respect about McKnight is his desire to interact in the field of the emerging church and emerging theology, but also maintain strong roots in both the historic church and the specific evangelical branch. I believe such is a very good approach for 21st century theology.

Let me say upfront that I am aware of many people being overly tired with the more modern-day proposal that we rethink our theological approaches concerning quite a few issues. McKnight, in his subtitle, utilises the word revisit rather than rethink, but it’s easy to note he is challenging our mindset in regards to the gospel. And I am very aware that the ‘in’ thing for today is that we always look to do participate in something new and different. I would argue there is nothing wrong with rethinking and refocusing our theological and practical foci within the Christian faith. We just need to be a little more a) led by God and b) connected to the body of Christ both past and present. I think McKnight falls in line here. And, so, whether we like it or not, he is still a theological mind to reckon with in the 21st century.

Now on to the book. END_OF_DOCUMENT_TOKEN_TO_BE_REPLACED 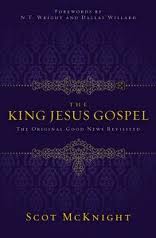 As I recently made known, we started up a series on the kingdom of God at Cornerstone this past Sunday (the audio and notes can be found at this link). And, though I had originally planned to purchase and read Scot McKnight’s newest release, The King Jesus Gospel, I had thought I would do it at some point down the road. Yet I decided to go ahead and get the book this week, believing it would be able to give some more insight into the gospel of the kingdom as I prepared my messages.

Hence, this week I purchased the book and have read about a third of it so far. The reason I held back at first is that, from what I can tell by reading other’s blogs about some of the book’s central points, I believe I was already on a similar page to McKnight. And I reckoned a lot of what he says has already been addressed by such New Testament studies pillars as N.T. Wright and George Ladd.

But, again, noting my recent preaching series that has begun, and also knowing I really like McKnight’s approaches to biblical studies and theology, I decided to purchase the book sooner rather than later. It has proved a good and stirring read thus far. END_OF_DOCUMENT_TOKEN_TO_BE_REPLACED

Yesterday, Scot McKnight posted an interesting article about the release of a book that looks at well-known evangelicals who have changed their minds about the roles of women in the church. The article starts off:

Alan Johnson, well-known and much-loved professor at Wheaton, has edited a collection of stories of well-known evangelicals who have in their own ways changed when it comes to women in ministry. His book has a great title: How I Changed My Mind about Women in Leadership: Compelling Stories from Prominent Evangelicals.

McKnight goes on to say:

Every person who is either “for” or “against” increased roles of women in leadership needs to read these stories.

He, then, specifically looks at how Dallas Willard came to have his mind changed. McKnight shares these 3 summary points about how Willard had his theology reshaped:

1. Those gifted by God for any ministry should serve in the capacity of that gift and churches (“human arrangements”) should facilitate their service. There is no suggestion anywhere in the Bible that gifts are distributed along gender lines. Go ahead and read the gift passages — says 1 Cor 12-14, Eph 5, 1 Pet 4 — and show how gifts are connected to gender.
2. It is misleading to deal with this issue along the lines of rights and equality alone. When it comes to talents and gifts people aren’t “equal” and it’s not about “rights” but about gifts and our obligations.
3. Excluding women leaves women generally with the impression that there is something wrong with them. They may be mistaken in that but Willard makes the important observation that if God excludes them there must be some very good reason — God doesn’t just flip coins. And the so-called complementarians can’t find clear passages where such things are clearly taught.

I can imagine many complementarians not appreciating #3, though I believe I understand where Willard would be coming from. Still, nonetheless, the first 2 points must definitely be grappled with.

I have done an extensive series on the role of women here at my blog (about 15 articles, which you can find a list of them here). I do have a couple more posts I would like to put up in the coming weeks to finish out the series.

In all, I am convinced the church is moving more and more towards egalitarianism (though I think the word complementarianism is a helpful description, but the word is used by those who would not allow women in major leadership roles, hence the use of another word). I don’t believe the church is heading towards ‘egalitarianism’ because it is becoming more and more lukewarm or heretical or ungodly. I think we are realising even more over the past decade or two that, what the previous generation began to realise about the social structure of skin colour, gender also does not determine our roles and giftings in God.

Over at Jesus Creed, Scot McKnight has another guest blogger in Lisa Baumert, who has written an article looking at the issue of headship, especially as found in the well-known Ephesians 5 passage, vs22-23.

I had posted an extensive series on the role of women a couple of months back (see here and here), looking at passages like the early chapters of Genesis, some passages in the New Testament on the new creation, and some of the more debated ones like 1 Corinthians 14:33-35 and 1 Timothy 2:8-15. It is also my desire to finish out the series in the near future, looking at two more highly debated passages in 1 Corinthians 11 and this text in Ephesians 5. But I believe that this article by Lisa Baumert over at Jesus Creed presents some very solid material. To quote a few statements:

Therefore, notice in 5:21 that Paul states that the Holy Spirit enables Christians to “submit to one another out of reverence for Christ.” Submission is presented here as a characteristic of the new humanity in Christ, not merely a feminine ideal—as common interpretations of this passage assume. All Christians are to submit to one another in love and humility—an idea which, at the time Ephesians was written, would have drastically challenged society’s understanding of human relationships. Rather than advancing the accepted and widespread hierarchy of his day, Paul challenged all people—men, women, slaves, and free—to be filled with the life-transforming power of the Holy Spirit, and so to submit to one another.

Male authority and leadership in the home and church is frequently supported by verse 23 which says, “For the husband is the head of the wife as Christ is the head of the church.” The term “head” is often read today to mean “ruler” or “authority.” The original Greek text of Ephesians however, does not allow for such an ordered interpretation of the word “head.” In this passage, the limits of the English language blur an important distinction between several meanings of the term that is translated “head” in English. Rather than indicating hierarchy, and therefore the unilateral submission of wives to their husbands, the Greek word for “head” used here by Paul is properly understood to convey the ideas of dependence and unity.

Kephale, the Greek word which is translated “head” in this passage, means “source,” and conveys the idea of one who willingly sacrifices and lays down their life. Thus, kephale indicated to Paul’s audience chronology rather than leadership or authority. This understanding of “head” is consistent with Paul’s assertion in 5:23 that Christ is the head or kephale of the church. Another Greek word which can be translated “head” in English is arche. Arche was used in Paul’s time to convey the idea of hierarchy, and was also utilized to mean “leadership” or “ruler.” Significantly, Paul did not use this word when speaking of marriage in Ephesians and thus he explicitly avoided conveying the idea of gender hierarchy and therefore male authority.

And finally, she concludes with these words:

Additionally, by selecting the Greek word kephale, or “head,” Paul speaks both of marriage and salvation history. Just as Christ’s body was the source of life for the church, so too Adam’s body gave rise to Eve (Gen.2). Thus, Paul was also seeking to highlight the unity and mutuality by which husbands and wives were to live. Christ and the church exist in a reciprocal and unified relationship of dependence. The church is dependent upon Christ for its wellbeing and life, and Christ lived and died for the sake of the church. Likewise, husbands and wives are to be unified and mutually loving toward one another. Therefore, the metaphorical similarity between the relationships of Christ and the church, and husbands and wives, is found in the idea of “source”—social dependence and unity—rather than in the commonly interpreted ideas of hierarchy and authority.

These thoughts give a solid basis for understanding 1) the Greek word kephale, 2) the idea of the Spirit-filled life of mutual submission in the greater context, and 3) that Paul is not addressing hierarchical authority here.

Finally, here is another good article over at Jesus Creed on ‘headship’ and authority in marriage.

My Tweets
Join 1,398 other followers