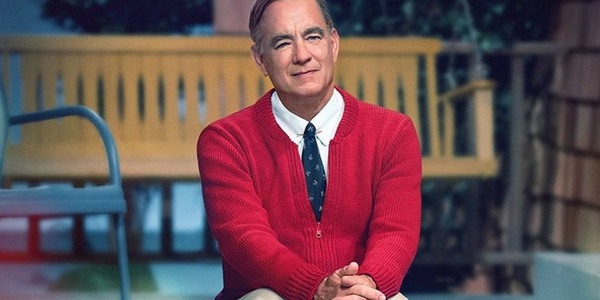 I rarely make it to the cinema these days, but this past weekend my wife and I were able to catch the new film A Beautiful Day in the Neighborhood, mainly because it was our anniversary and the kiddos were with my parents. I’m late to the game as well, since the movie hit theaters 3 weeks ago. That’s an eternity in the cinematic world.

I was aware of the documentary that came out a year and a half ago (and I still haven’t seen that), but I just expected this film to be mostly about the tv show, Mr. Rogers’ Neighborhood. As a kid growing up in the 1980s, I have fond memories of it. Not any more than other shows I watched, such as the Muppets or Sesame Street. But I have good memories of this show.

That’s it. I have memories of the show. Maybe not Mr. Rogers as much. Yes, I remember him, his face, his voice, his songs.

But I didn’t know him.

Again, I knew him to some extent. The man on the screen, the man who was kind. And I didn’t think he was otherwise off the screen (which the film makes clear).

Yet it was this film that really opened a window into who Mr. Rogers was. And, let me say, it was beautiful, amazing, heart-warming and more. Tears were welling up at one point.

In all, the film is more about who Fred Rogers is off the screen than who he is on the screen. Yet, this is the kicker, as I mentioned – they are one and the same. But, in the movie, we get a glimpse into one relationship Mr. Rogers had with a particular journalist assigned to write an article about Rogers. While some of the details are fictionalized – and I don’t want to share more, as to keep from any spoilers – the relationship seems to be a true one (as best I can tell from reading articles).

I walked out of a movie, yes, brought back to my childhood. I’ve been humming the tune the past couple of days. Yet I also left with something greater to carry me forward – kindness, tenderness, gentleness.

I’m deeply grateful to have caught this film.