It’s Sunday and that normally means I would be posting my weekly ponderings and links. But I wanted to go a different route. I wanted to list 5 books that I’m looking forward to reading in 2018. It is my plan to read many more. But here are 5 specific ones.

1) Salvation by Allegiance Alone: Rethinking Faith, Works, and the Gospel of Jesus the King by Matthew Bates. I am grateful to see that this book looks to pull faith out of a more “ethereal” idea and grounding it more in what is tangible allegiance unto Christ. This book won quite a few awards in 2017. Here is the Amazon blurb:

We are saved by faith when we trust that Jesus died for our sins. This is the gospel, or so we are taught. But what is faith? And does this accurately summarize the gospel? Because faith is frequently misunderstood and the climax of the gospel misidentified, the gospel’s full power remains untapped. While offering a fresh proposal for what faith means within a biblical theology of salvation, Matthew Bates presses the church toward a new precision: we are saved solely by allegiance to Jesus the king. Instead of faith alone, Christians must speak about salvation by allegiance alone.

2) Cross Vision: How the Crucifixion of Jesus Makes Sense of Old Testament Violence by Greg Boyd. As one who has spent much time teaching the Old Testament, I am quite passionate about coming to better grips with who God really is, especially in light of what we see in Christ. We do not embrace Marcionism, but we recognize the challenge of that lies on the pages of the Bible. I like where Boyd goes in this work. Here is the Amazon blurb:

The Old Testament God of wrath and violence versus the New Testament God of love and peace, it’s a difference that has troubled Christians since the first century. Now, with the sensitivity of a pastor and the intellect of a theologian, Gregory A. Boyd proposes the “cruciform hermeneutic,” a way to read the Old Testament portraits of God through the lens of Jesus’ crucifixion.

In Cross Vision, Boyd follows up on his epic and groundbreaking study, The Crucifixion of the Warrior God. He shows how the death and resurrection of Jesus reframes the troubling violence of the Old Testament, how all of Scripture reveals God’s self-sacrificial love, and, most importantly, how we can follow Jesus’ example of peace.

3) Sinners in the Hands of a Loving God: The Scandalous Truth of the Very Good News by Brian Zahnd. This book connects above with Boyd’s Cross Vision. Zahnd is a champion that we must understand the writings of the Old Testament in light of how God is revealed in Christ. The Amazon blurb:

In his famous sermon “Sinners in the Hands of an Angry God,” Puritan revivalist Jonathan Edwards shaped predominating American theology with a vision of God as angry, violent, and retributive. Three centuries later, Brian Zahnd was both mesmerized and terrified by Edwards’s wrathful God. Haunted by fear that crippled his relationship with God, Zahnd spent years praying for a divine experience of hell.

What Zahnd experienced instead was the Father’s love—revealed perfectly through Jesus Christ—for all prodigal sons and daughters.

In Sinners in the Hands of a Loving God, Zahnd asks important questions like: Is seeing God primarily as wrathful towards sinners true or biblical? Is fearing God a normal expected behavior? And where might the natural implications of this theological framework lead us?

Thoughtfully wrestling with subjects like Old Testament genocide, the crucifixion of Jesus, eternal punishment in hell, and the final judgment in Revelation, Zanhd maintains that the summit of divine revelation for sinners is not God is wrath, but God is love. 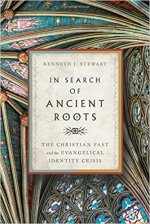 4) In Search of Ancient Roots: The Christian Past and the Evangelical Identity Crisis by Kenneth Stewart. For a few years now, I have been drawn more and more to the roots of the ancient church – the history, the liturgy (or tangible rhythms). I am still evangelical, meaning at my core I believe the evangel – the good news of what God has done in and through Jesus and in proclaiming that good news. But at times, the traditional settings of our more seasoned, sister churches do pull on me. More and more I find sustenance in these ancient roots. Here is the Amazon blurb:

Protestant evangelicalism is in crisis. Today it is increasingly difficult for Protestants to identify what counts as distinctively Protestant, much less what counts as evangelical. As evangelicals increasingly lose contact with the churches and traditions descending from the Reformation, and as relations with Roman Catholicism continue to thaw, it becomes harder to explain why one should remain committed to the Reformation in the face of perceived deficits and theological challenges with the Protestant tradition. A common complaint about Protestant evangelicalism is its apparent disconnect from ancient Christianity. The antiquity and catholicity of Roman Catholicism and Eastern Orthodoxy seem to outshine the relative novelty of the Reformation. Some evangelical churches appear to be uninterested in the ancient historical roots of their faith as well as being liturgically and doctrinally unstable. Many within evangelicalism seem to have accepted at face value the suggestion that the evangelical faith is no more than a threadbare descendant of ancient Christianity. The result is that a number of younger Protestants in recent years have abandoned evangelicalism, turning instead to practices and traditions that appear more rooted in the early church. In Search of Ancient Roots examines this phenomenon and places it within a wider historical context. Ken Stewart argues that the evangelical tradition in fact has a much healthier track record of interacting with Christian antiquity than it is usually given credit for. He surveys five centuries of Protestant engagement with the ancient church, showing that Christians belonging to the evangelical churches of the Reformation have consistently seen their faith as connected to early Christianity. Stewart explores areas of positive engagement, such as the Lord’s Supper and biblical interpretation, as well as areas that raise concerns, such as monasticism. In Search of Ancient Roots shows that evangelicals need not view their tradition as impoverished or lacking deep roots in the tradition. Christian antiquity is the heritage of all orthodox Christians, and evangelicals have the resources in their history to claim their place at the ecumenical table.

5) Death Comes for the Deconstructionist by Daniel Taylor. This is an award-winning novel that comes from the publishers I work with, Wipf & Stock. I, too, want to try my hand at fiction at some point, so I’m interested to see how things develop in this work, as well as the second volume, Do We Not Bleed. More below:

Jon Mote–grad school dropout and serial failure–has been hired to investigate the murder of his erstwhile mentor, Richard Pratt, a star in the firmament of literary theory. Feeling unequal to the task, Mote skitters on the edge of madness, trying to stifle the increasingly threatening voices in his head. His only source of hope is the dogged love of his developmentally disabled sister, Judy, who serves as cheerleader, critic, and moral compass.

Death Comes for the Deconstructionist follows Mote and his sister through the streets and neighborhoods of Minneapolis and St. Paul, Minnesota–from crime scenes to the halls of academe. Mote’s investigation uncovers a series of suspects–including the victim’s wife, mistress, and intellectual rivals. Along the way he stumbles onto Pratt’s terrible secret, one that prompts the discovery of an equally dark mystery from his own past.

These revelations hasten Mote’s descent into darkness, putting both him and Judy at grave risk. Death Comes for the Deconstructionist is a tragicomic mystery, a detective story that is at once suspenseful, provocative, and emotionally resonant. It asks not only “whodunit” but whether truth is ultimately something we create rather than discover.

Again, I believe I will read much more, but these are definitely 5 books I want to sink my teeth into in 2018.