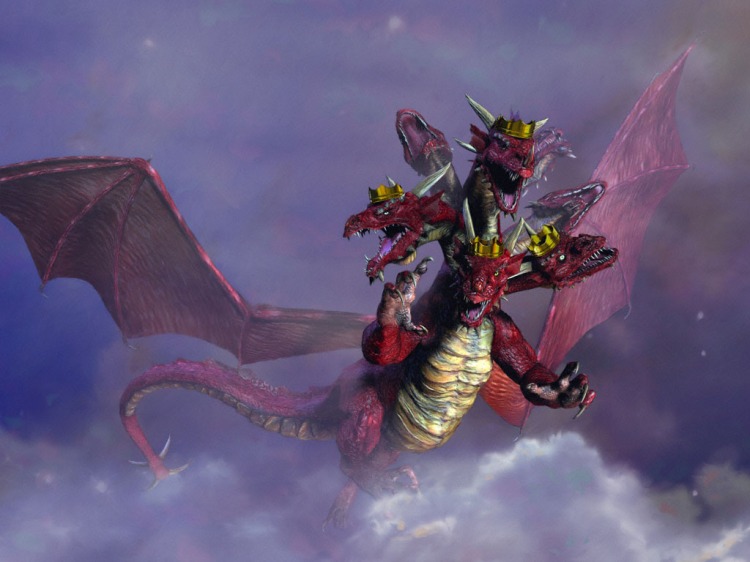 There are a lot of Advent blog posts floating around these days. Makes sense, knowing it’s the Advent season. I have joined in myself with a post on the hope of Advent. But there is one blog post in particular that seems to have caught the attention of many. It’s Chad Bird’s When a Dragon Tried to Eat Jesus: The Nativity Story We Don’t Talk About.

1 A great sign appeared in heaven: a woman clothed with the sun, with the moon under her feet and a crown of twelve stars on her head. 2 She was pregnant and cried out in pain as she was about to give birth. 3 Then another sign appeared in heaven: an enormous red dragon with seven heads and ten horns and seven crowns on its heads. 4 Its tail swept a third of the stars out of the sky and flung them to the earth. The dragon stood in front of the woman who was about to give birth, so that it might devour her child the moment he was born. 5 She gave birth to a son, a male child, who “will rule all the nations with an iron scepter.” And her child was snatched up to God and to his throne. 6 The woman fled into the wilderness to a place prepared for her by God, where she might be taken care of for 1,260 days.

Bird starts out with these words:

I’m still searching for a Christmas card with a red dragon in the nativity, lurking amidst the cows and lambs, waiting to devour the baby in the manger.

None of the Gospels mention this unwelcome visitor to Bethlehem, but the Apocalypse does. John paints a seven-headed, ten-horned red dragon onto the peaceful Christmas canvas. You can read all about it in Revelation 12.

It’s the nativity story we don’t talk about. A dragon trying to eat our Lord.

He’s right. We rarely think about Rev 12, at least during Advent, though some probably over-emphasize it in the midst of end-times theorizing.

When we read the passage, it seems to speak of the birth of Jesus: She gave birth to a son, a male child, who “will rule all the nations with an iron scepter.” And her child was snatched up to God and to his throne (vs5).

While Bird’s interpretation is intriguing, and not dissimilar to many commentators on Revelation, I think it possibly misses the more Jewish nature behind the imagery. Instead, I would point us to New Testament scholar, Andrew Perriman. While his article is a bit more theologically “dense,” at least when looking for a typical Advent devotional, I believe he is more true to the narrative of Scripture.

Perriman ultimately takes an “historical-narrative” approach to Scripture, rather than a more abstract approach. Or let’s say it this way: Perriman takes the works of folk like James Dunn and N.T. Wright even further in emphasizing the historical and narrative storytelling of Scripture, all with a very Jewish-centered flavor.

Early on, Perriman notes his overall concept regarding Scripture: “. . . the New Testament is fundamentally about how the God of Israel comes to judge and rule the nations, not in some abstract theological sense but in history” (emphasis his). The God of Israel will rule through Israel’s Messiah, Jesus.

Much of what is happening in Rev 12 is connected to the Old Testament narrative (see his points in his article). But Perriman’s conclusion is different from Bird. He summarizes:

This already gives us an outline interpretation of Revelation 12. At a time of severe political-religious crisis a righteous Jewish community in Jerusalem painfully gives birth to a Son, who is immediately caught up to the throne of God. This “birth” is not the incarnation of Jesus but his resurrection. The king is “begotten” on the day that he is given the nations as his heritage, eventually to judge and rule over them (cf. Ps. 2:7-9). The community then comes under attack from the aggressive pagan empire but gains victory over it “by the blood of the Lamb and by the word of their testimony, for they loved not their lives even unto death” (Rev. 12:11). The realistic victory of the persecuted Jewish-Christian community over Rome is prefigured in heaven by the defeat of the dragon by Michael—the “great prince who has charge of your people”. Such a political-religious event—not the final renewal of all things—is the coming of the kingdom of God (Rev. 12:10) (emphasis mine).

This allegorized, Jewish account in Revelation is not solely about Christ himself, much less connecting it to his specific birth in the gospels. Rather it’s about Christ coming through (“birthed by”) the early Jewish community and then how this community survives within the midst of the pagan empire of Rome. There is a battle taking place that is very much historical, though of course there is a “spiritual” nature to the this battle.

Perriman goes on to look at some other details about Rev 12, which you can read for yourself. Yet, while Bird does well to bring to our attention a passage that is rarely considered at this time of year, I think Perriman does the better job in situating the passage within its collective historical narrative unfolding for the early Jewish-Christians.

The Son has come to rule on behalf of Yahweh and, as noted by Perriman, “the God of Israel would sooner or later take control of the empire.”