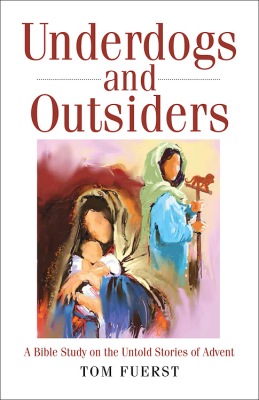 I recently finished a new book that hit the shelves a few weeks back. It’s entitled Underdogs and Outsiders, written by my good friend, Tom Fuerst. Though the main title may catch one off guard – noting it’s a study particularly written for the Advent season – it actually highlights the exact thrust of the book.

This new work from Fuerst is an Advent study in how God used five unexpected women – underdogs and outsiders, to be exact – to accomplish his redemptive purposes. In particular, these five women are found in Matthew’s genealogy – Tamar, Rahab, Ruth, Bathsheba and, or course, Mary.

To introduce the work, Fuerst writes:

“This Advent study focuses on just a few of the broken branches: the unlikely heroines of the story. We don’t often hear these stories during Advent. But the stories of the five women in Christ’s lineage – Tamar, Rahab, Ruth, Bathsheba, and, Mary – embody the reality into which Christ came and the Advent hope we can find within it. Had Matthew wanted a cleaner, more clearly Jewish sampling, he could have worked with Sarah, Rebekah, Leah, or Rachel. But Matthew wants to show this Savior came for everyone, including underdogs and outsiders.” (p12)

In all, this is what makes the book your not-so-ordinary Advent study:

1) It focuses on the women of Advent.

Of course, every Advent we focus on Mary. That’s no problem. But we forget about the infamous Tamar, Rahab, Ruth and Bathsheba. This book champions the work of God through women – not merely as a side project to what he does through men, but how these five women (particularly as “underdogs and outsiders”) were exactly whom God wanted to use for his purposes in the world.

2) It focuses on the dirty of Advent.

Sure, we imagine a smelly stable with animals, though there is discussion around what and where this “manger” would have been located (from Luke 2). But we do not fully realize how God faithfully used – and desired to use, at that – those who would have truly been considered outcasts. Perhaps a few of these women are considered heroes of the faith, and they should be. But we clean up their stories in order to make them heroes. Fuerst is not interested in cleaning them up, just as Scripture is not interested in doing such. In Underdogs and Outsiders, we are reminded of the nitty-gritty details of these five women, details we might not easily catch. We, thus, see the glory of God through the dirty of Advent.

3) It focuses on the justice of Advent.

One of the greatest points offered in the book, at least from my perspective, is how God calls forth the oppressed, outsider and broken to ultimately bring about restoration and justice for the oppressed, outsider and broken community. That’s the story of Jesus; that’s the story of his advent-coming. With Christ’s coming, we primarily highlight its purpose in regards to forgiveness of our personal sin. So Jesus’s coming becomes warm and fuzzy for us all, fitting nicely on a tree ornament or a decorated manger scene. And that’s not wrong. But Advent is just as much about a peasant Jew – who happens to be God’s kingly Messiah – breaking and defeating real systemic evil and injustice through his birth, life, death and resurrection. This was good news, for the Jews had been waiting centuries for the good and just Messiah to come make things right.

So, as Advent begins tomorrow, I’d encourage you to grab this short study and prepare to rethink God’s work of redemption and restoration for the world through five underdog and outsider women.