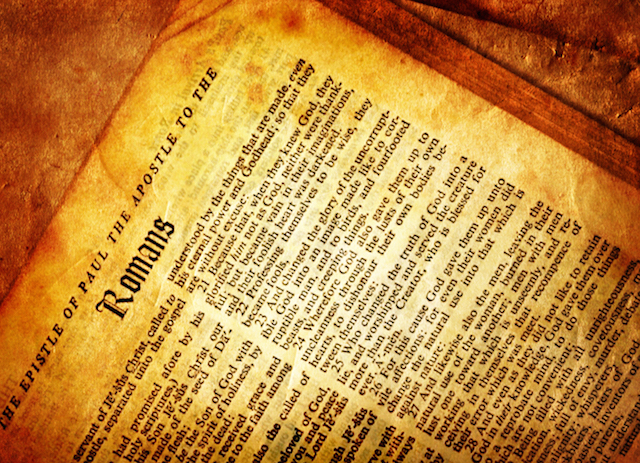 Romans might be the most, or at least one of the most, discussed and studied books of Scripture. It’s mined for all words that end with -ation: condemnation, justification, sanctification, glorification, etc. I’ve heard one pastor label it the Constitution of Christianity. It’s as if Romans is viewed as an abridged version of our present-day Systematic Theology texts.

But perhaps we are missing something?

I used to see Romans as just that – treating it primarily as a systematic theology, rather than what it truly is. Now, don’t miss what I’m saying here. I do believe there is much to gather on these theological concepts from the letter to the church in Rome. But that’s not the underlying foundation of why the letter was written.

And did you catch that word in my statement – It’s a letter.

We might also call it an epistle, which is a letter that teaches. And Romans (as well as all writings found in the New Testament) are didactic in nature, meaning they are written to teach the original audience, and us, something deeply important. But isn’t it interesting that these are letters. Letters written to a group of real people walking out real life. Of course, letters can be organized – I take more of a left-brained approach myself and are generally organized in my writing style. Still, a letter is written from a much different perspective than that of our systematic theology texts.

So what is the underlying story of Romans?

Paul’s writing to bring together a church that has a practical divide between Jew and Gentile.

Now, we really can’t understand this divide. I mean, we can intellectually understand that it’s there. But we can’t feel what this church is feeling over the problem of Jew and Gentile relating to one another. It’s just not a big deal for us.

Yet it was a massive deal for the early church, including Rome.

Here were the Jews, whom Paul described this way: to them belong the adoption, the glory, the covenants, the giving of the law, the worship, and the promises. To them belong the patriarchs, and from their race, according to the flesh, is the Christ, who is God over all, blessed forever. Amen.

And then we have the Gentiles coming in.

And, so, Paul is trying to bring these two groups together.

How does propose that two groups can come together? He tells the greatest story he knows – the Abraham and Israel story – and how both Jew and Gentile fit in to that story.

That is Paul’s approach.

I love stories. From children’s to grown adult stories, I truly love them! And this is how Paul is drawing these two groups in. He’s not trying to give them a Systematics 101 class. He’s laying out the narrative of God’s plan through a man (Abraham) and his people (Jews), which relates to all peoples (including Gentiles). From this storyline, every Jew would remember Abraham’s call in Gen 12:1-3. And every believing Gentile would have begun to have some familiarity with this story of Scripture. They were becoming aware that all peoples of the earth were to be blessed through Abraham and his story.

And how would this story all tie together? In Jesus.

God has ultimately been weaving together a narrative tapestry – through Abraham and Israel – but climaxing and completing it all in Christ. And it’s in Christ that the whole Jew and Gentile divide is destroyed.

God’s story is the same. His righteousness is upheld by him finishing the Abraham story he began long ago, but in a way that caught many off guard. He finished it in the life, death, and resurrection of Christ. It’s a beautiful and powerful ending, I might add!

That’s the background to this letter to the church in Rome.

So, in all, I might summarize Romans with these 4 points:

a) It’s the recounting of the Abraham & Israel story
b) to show the faithfulness of God to complete the story in the Messiah, Jesus
c) which is a story that says both Jew and Gentile have a problem and are made right with God by faith in this Messiah, Jesus
d) therefore the two groups can live reconciled together because they’ve been reconciled to God in Jesus.

This is the framework to the letter. This is the primary focus. And I believe something draws us in a little more when we remember this storyline above and beyond the approach that says Romans is a systematic, constitutional document.

3 thoughts on “The Underlying Storyline of Romans”