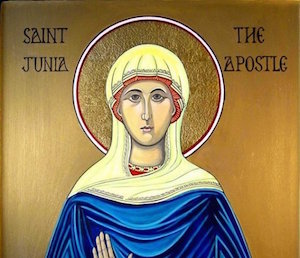 Yesterday was International Women’s Day. In light of such, I put up a link to an article of mine where I reviewed Scot McKnight’s short ebook, Junia Is Not Alone. The book is all of 25 pages.

In the book, McKnight discusses the enigmatic Junia (or Junias, in some translations). Many may not have heard of her, but she is mentioned at the end of Paul’s letter to the church in Rome. In those days, the major greetings came after the body of the letter. So we read about Junia, and Andronicus (her supposed husband), in Romans 16:7.

In particular, McKnight assesses 2 problems that have arisen over the centuries:

Let me list out 10 different translations of Romans 16:7, if you can bear browsing through them, to see how the verse is translated in varying ways. I have also added bullet points just below a particular translation if that translation offered any footnotes.

Say hello to Andronicus and Junia, my relatives and my fellow prisoners. They are prominent among the apostles, and they were in Christ before me. (CEB)

Greet Andronicus and Junia, my kinsmen and my fellow prisoners. They are well known to the apostles, and they were in Christ before me. (ESV)

Greet Andronicus and Junia, my fellow countrymen and fellow prisoners. They are noteworthy in the eyes of the apostles, and they were also in Christ before me. (HCSB)

Greet Andronicus and Junias, my kinsmen and my fellow prisoners, who are outstanding among the apostles, who also were in Christ before me. (NASB)

Greet Andronicus and Junia, my compatriots and my fellow prisoners. They are well known to the apostles, and they were in Christ before me. (NET)

Greet Andronicus and Junia, my fellow Jews who have been in prison with me. They are outstanding among the apostles, and they were in Christ before I was. (NIV)

Greet Andronicus and Junia, my countrymen and my fellow prisoners, who are of note among the apostles, who also were in Christ before me. (NKJV)

Greet Andronicus and Junia, my relatives who were in prison with me; they are prominent among the apostles, and they were in Christ before I was. (NRSV)

Greet Androni′cus and Ju′nias, my kinsmen and my fellow prisoners; they are men of note among the apostles, and they were in Christ before me. (RSV)

…salute Andronicus and Junias, my kindred, and my fellow-captives, who are of note among the apostles, who also have been in Christ before me. (YLT)

Of these 10 major English translations, it is interesting to note that 3 (NASB, RSV, YLT) of them make Junia a male outright by use of the word Junias. Also, there are another 3 translations (ESV, HCSB, RSV) that offer a footnote detailing that Junia might be translated as Junias.

Now here is something to remember, which McKnight reminds us of in his little book: There is no evidence that any man had the name Junias.

Makes one wonder if there is an agenda in some of the translations?

But why an agenda?

Well this relates to the discussion around the role of Junia. Was she “well-known to the apostles” or was she “outstanding among the apostles.”

Do you see the ramifications here?

The question arises: Did she have an apostolic ministry (with Andronicus) or was she simply well-known to the group of existing apostles?

Being even more detailed, we would need to consider that little word en – this could be translated as to or among. One opens the door to apostolic ministry, the latter, but the other doesn’t.

Now, in all honesty, we cannot nail this down exactly – and I’m ok with that. But what highlights a problem to me is noting how some translators have worked hard to make sure Junia is a man, or at least possibly a man, which cuts out any possibility for women apostles. It brings to light that an agenda could be there, something maybe like this:

To settle the debate of the role of Junia, we can identify her as a male. Then, whether we translate that little Greek word, en, as “to” or “among,” it won’t really matter. Men can be apostles, so Junias, the man, can be an apostle.

Now, I cannot prove an agenda, having not had a discussion with the editorial team of each of these translations. Still, it leaves one wondering what is actually going on. Why work so hard to make Junia a male?

For me, I believe the larger problem is that most people don’t even realize that there were more than 12 apostles in the early church, or more than the 12 + Paul. I’d argue that there were some 20+ apostles that are specifically noted in the New Testament (including Andronicus & Junia). However, I’d also remind us that each of these apostles had differing measures of gifting. Paul had a very large apostolic measure, even above some of the original 12. And this should not belittle Thomas’ or Matthias’ (who replaced Judas Iscariot) apostolic calling and ministry. We also need to recognize James’, Apollos’, Silas’ and other’s apostolic ministry. It’s pretty clear they each functioned as apostles, even though not all of them had that specific word stuck before or after their name (James actually was directly identified as an apostle by Paul in Gal 1).

In all, what we need to allow is for our box to be broken open, enlarging our understanding that there were well more than 13 apostles in those early days. Pushing open this first box that there were more than 13 initial apostles will allow us to at least consider that God actually gifted women in such a role. The greatest examples we have of women with plausible apostolic ministries are within the two couples of Priscilla & Aquila and Andronicus & Junia. Here were strong couples who, I believe, were used in significant apostolic ministry. Not that they penned Scripture – for that is not the prerequisite for apostolic ministry – but that they functioned as apostles in establishing the foundation of the church, maintaining it, initiated new works of God, were most likely used in miracles and healings, etc.

So let’s summarize some of the major points I’ve looked to establish:

So, we conclude that there was a first-century relative of the apostle Paul named Junia; she entered into Christ before Paul did; and this Junia was an apostle. Which means (because this is what apostles did) she was in essence a Christ-experiencing, Christ-representing, church-establishing, probably miracle-working, missionizing woman who preached the gospel and taught the church. (loc.91-93)

And I close with what I said in my review of McKnight’s book, Junia Is Not Alone.

Of course, this means not that we simply place any woman in any role just to make a theological point. By no means! But there are Junia’s across the church today, across the varying expressions of Christ’s body in this world. They will have an effect that no man could have. These women carry a deep wisdom, gifting and anointing that must be released. We might be hesitant to open such doors, God forbid. But we know our God will be faithful to see more and more Junia’s released out of mistranslations and into gospel, transformative ministry.

5 thoughts on “Junia: An Apostle or Not?”