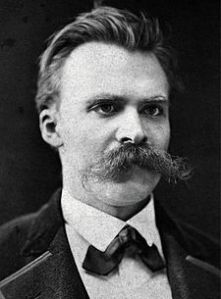 I’ve stated this before – I am no great philosopher. I muse over things through a theological lens, though one can’t get away from philosophical frameworks.

I have tried my hand at understanding a little around the epistemological perspectives (“how we know what we know”) of the 3 eras of history, which are pre-modernism, modernism and post-modernism. In this, I owe much to the works of James K.A. Smith and Kenton Sparks, particularly Smith’s, Who’s Afraid of Postmodernism, and Sparks’, God’s Word in Human Words. Both books were super-informative and illuminating in getting my mind around some of these philosophical concepts.

In particular, I spent some time today teaching on postmodernism, mainly as I addressed the larger topic of how to properly engage in communicating the gospel in our current world setting. We cannot communicate the gospel as if we still lived in the 1950’s, nor even in the 1990’s. The times, they have a changed! Even from the 90’s to 10’s!

He is most associated with the brief, and bumper-sticker-esque, statement: God is dead. And that’s all I had known in previous years. All most know about him. It almost sounds like a pronouncement of fact about God – He’s dead, haha! However, one day, I was made aware of Nietzsche’s more complete thought by a history professor of Michigan State University, he also being a pastor of an evangelical church.

Here is the statement fleshed out more fully in Thus Spoke Zarathustra:

God is dead. God remains dead. And we have killed him. Yet his shadow still looms. How shall we comfort ourselves, the murderers of all murderers? What was holiest and mightiest of all that the world has yet owned has bled to death under our knives: who will wipe this blood off us? What water is there for us to clean ourselves? What festivals of atonement, what sacred games shall we have to invent? Is not the greatness of this deed too great for us? Must we ourselves not become gods simply to appear worthy of it?

Wow, lot more food for thought there than first imagined.

This almost serves as a pronouncement upon humanity in the midst of modernist, Enlightenment that had swept across the western world. Not a hoorah, but a lament. Descartes, “I think, therefore I am,” and the full reality of scientific rationalism had pushed God out. Yet, as Nietzsche reminds us: “his shadow still looms.”

Nietzsche, who was no believer, finally settled on existential nihilism, seeing no purpose or meaning in life. But I’d posit that his words can still teach us today, teach the Christian church.

In a sense, in the early 1900’s, the church got fully wrapped up in the post-Enlightenment, modernist approach to how we know truth – “I think, therefore I am.” And we’re actually still there in many respects in America. Of course, there were positives offered from scientific discoveries, no doubt. Let us not forget that and throw the baby out with the bath water. Perhaps that is Nietzsche’s final play. But “proving” something like God’s existence, Jesus’ resurrection, or the veracity of Scripture does not happen by engaging the modernist world on their terms. Such is not done by the sole engagement in empirical, factual data. How does one empirical “prove” the resurrection of Jesus Christ?!

Or here’s another question: How does one empirically prove love or pain or imagination?

All 3 of those are true, but they are not fully defined through scientifically investigated data. My relationship with my wife is not confined by that at all. Art, music, dance, brokenness, etc, are all defined by something more holistic. This is why I will always champion something like the Wesleyan quadrilateral – that we come to know God and his truth through the 4 avenues of faith/Scripture, tradition/history, reason and experience. This is why I will champion what is known as practical realism and a moderate postmodern perspective on life, as does the like of Christian theologians and philosophers such as Smith and Sparks.

Modernism and it’s sister, rationalism, killed God. But resurrection lies on the horizon. Perhaps Nietzsche lamented what he saw. Perhaps the likes of Derrida have something to offer the church of the resurrection in the 21st century.