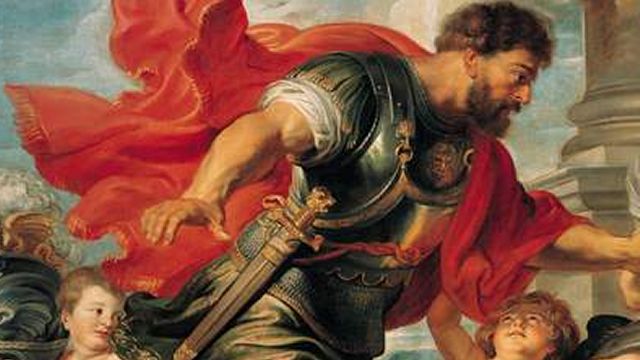 It’s all around us.

I drive to work listening to NPR in the morning and I’m greatly reminded of this through the news about Russia-Ukraine, Palestine-Israel, Afghanistan, Iraq. And then there’s the homeland as well – shooting after shooting, living in a city with one of the highest violent crime rates per capita in the U.S, drones heading every which way, and more.

It’s all around us.

We recently celebrated a “holiday” (holy-day??) in which we remember how our nation came to “freedom” through war, a war of rebellion. “…And the rocket’s red glare, the bombs bursting in air, gave proof through the night that our flag was still there.” Our flag still hanging, possibly by only a few threads, as a war ended with approximately 25,000 deaths. This set the path for a Civil War some 80 years later in which the death toll might have reached 750,000.

“…that our flag was still there.”

But I’m not so sure much of this falls in line with the Jesus whom we encounter within holy Scripture.

I’ve never been an American exceptionalist. I’ve never championed some over-the-top patriotic call, though, in my early teens, I do remember somehow believing we were the great heroes of the Gulf War.

Yet, over the past few years, I’ve been moved towards quite a different perspective about war and violence. Again, not that I’ve been some blood-thirsty devotee of past days who has gone through some major Damascus Road conversion to pacifism. Very few reach that blood-lust level. But something has slowly changed with my outlook on war and violence.

And this is not so much about not holding a particular position any longer. Rather it’s about being drawn into something, or someone, different.

Kind of like my new birth of nearly 20 years ago. It’s not so much that I finally came to the conclusion that Kurt Cobain wasn’t a hero worthy of my following (Yes, it’s true. He was my “hero” in my mid-teens.) Rather I got a glimpse of someone else that asked me to follow him – Jesus of Nazareth. Jesus and Kurt were not ultimately brothers. What I saw in Jesus, or the little I did see then, compelled me towards a laying down of everything in order to follow him. Simple command; simple answer.

And, so, here I am faced with what I believe is an even greater picture of who Jesus really is. One who actually means what he says when relaying words like:

Blessed are the merciful, for they will be shown mercy.

Blessed are the peacemakers, for they will be called children of God.

But I tell you, do not resist an evil person. If anyone slaps you on the right cheek, turn to them the other cheek also.

But I tell you, love your enemies and pray for those who persecute you, that you may be children of your Father in heaven.

Of course he truly meant these words, right? They were to take precedence in our lives, correct?

Read those words of Jesus again.

We believe God is more like Jesus than say, Mars, correct? Mars is the Roman god of war. Something tells me Jesus and Mars are not brothers.

Speaking of Mars, I’m nearly done with a new book release entitled A Farewell to Mars by pastor and writer, Brian Zahnd. In the book, Zahnd contemplates this: When did we accept vengeance as an acceptable part of the Christian life? How did violence and power seep into our understanding of faith and grace? For those troubled by this trend toward the sword, perhaps there is a better way.

He shares his own journey away from believing in the American way of defending freedom at all costs, even through war and violence. Even more, he shares of what he calls his “worst sins” – gathering around the tv with friends in anticipation of watching Operation Desert Storm and praying prayers of vengeance before a multiple congregation gathering following the heinous event of 9/11. And as he prayed that prayer in 2001, the Christians present were also in agreement because, of course, 9/11 was so unjust.

Zahnd truly believes they are his worst sins.

But a few years following 9/11, his life was wrecked, culminating in a trip to the Rocky Mountains. He hit a point of profound change on the drive back, one that led to the penning of a poem entitled, Out of the Corner of My Eye.

His words resonate with me. Not as anti-America, by the way. But as looking to behold the fullness of Christ, not just a slice.

I’m also convinced Jesus is not a god of war. He has no relation to Mars.

Now, I’m not saying God is not just and that he will not fully and finally deal with unrighteousness, injustice. But remember this, please remember this: to be just is ultimately about making things right. It’s not first and foremost about getting retribution on your enemies. And remember also that Jesus only teaches what he himself is willing to live: But I tell you, love your enemies and pray for those who persecute you, that you may be children of your Father in heaven.

God is committed to making things once again good and right, in all the cosmos, starting today.

But God is not one who empowers the empire, strengthens the oppressors, cheers on the violent. He is one who lays his life down for not only the poor and weak, but for his enemies.

This is the Jesus I am beginning to notice more and more in the pages of Scripture.

I wouldn’t classify myself as some political pacifist. And I don’t feel empowered at this point to join those who picket or rally with outrage against violent war (I might suggest that this can also be based in revenge, a not-too-distant cousin of violence). But I’m convinced the way or Scripture, the trajectory of Scripture, is that Jesus does not empower his people to be violent and kill and embrace war.

Here’s what I cannot imagine at all: Jesus turning to the twelve and saying, “Listen, those Romans, they are evil in their pagan worship and sacrifices. They pervert the true ways of God. They are a stench in my Father’s nostrils. I ask you to take up the sword and put them to death. All of them. Every last one of them.”

Something sounds very un-Christlike about that.

Jesus and Mars are not brothers.

Again, I’m not saying that God is not just and will not make all things right, including judgment upon the wicked for their actions. However, that privilege belongs to God and Christ alone, not you and I, nor any empire for that matter.

What about the Old Testament?

Yes, what about it? There are many ways in which Joshua and David mirror the true Messiah. But I’d say there are also ways in which they don’t. In the theological discussion around the “progressive revelation” of Scripture, I think it plausible to say those folk of long ago were missing some vital aspects of God’s revelation, which would come to full fruition in Christ himself. Of course, there are great questions to reflect on: What of the direct Old Testament statements in the Old Testament that begin with, “God says…,” followed by instructions to slaughter people? It’s a good question, one that’s been discussed for 2000 years (or more). And, as a side note, I’m not attacking the veracity of Scripture. But I’m bringing up pertinent points that must be brought to the table.

As I stated, and as we all should know, the full and final revelation of who God is, what he is like, is seen in the face of Jesus. And the only violence Jesus takes on is the violence he endures himself, on behalf of humanity. Our suffering God takes on the violence of those he created. His statement is loud and clear: I, too, will love my enemies, even unto death. I will not retaliate.

Or as quoted by the biblical evangelist, Luke: Father, forgive them, for they do not know what they are doing.

How’s that for justice?

But as Brian Zahnd reminds us in his book: It seems we Christians have had a habitual tendency to separate Jesus from his ideas.

And separate him from his actions.

This is the Jesus we identify as the Incarnate Word of God, with his ideas and his actions. Somehow, it’s possible that not only are Jesus and Mars not brothers, but Jesus and Uncle Sam might not be either.

A final reason that grips me of why I believe the trajectory of Scripture is that of non-violence is when I look at the response of the early church (both recorded in Scripture and in early church history) as it endured massive persecution under Rome. Not one ounce of violent retaliation. And not any political picketing about rights either.

I can’t fathom this. Really, I can’t. And I’m certain most of you can’t either.

And it doesn’t mean I have all the answers to all the questions. Is it ok for defensive war if attacked? What if someone was attacking my wife and kids? What about self defense in certain situations?

I’m not sure I would say I’m a teetotaler here, though maybe I should be. I’ve just not fully completed my reflections on this topic (will I or should I ever?). But I am convinced as a general principle that violence and war are not at the heart of God. They display nothing of the cross, which is the glory of God in Christ. Even with all the questions as expressed in this article, and the plethora of others that might arise, I can embrace Jesus as non-violent, non-empowering of his people to take out the enemy.

Jesus: his life, teachings and response in crucifixion.

The early church: under grave persecution from Rome.

Both let me know what is the true impulse of our God.

This is why I believe Jesus and Mars are not brothers.

I believe Love-Incarnate (not mish-mash love, but true sacrificial love unto death) and War-Incarnate do not look like one another. At all.

One thought on “Jesus & Mars Are Not Brothers”