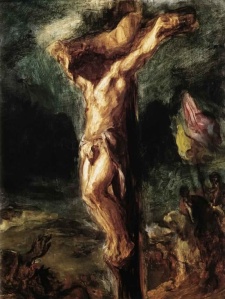 It’s holy week in the Christian calendar. Today is Good Friday, remembering the crucifixion of Christ. Tomorrow is Holy Saturday, or what I think is better identified as Silent Saturday. Then we have Easter Sunday, given to celebrate the reality that Jesus walked out of the grave alive.

What I want to do today, which I’ve shared on before, is not consider the words of the gospels in regards to Christ’s death (though they are amazing!). Rather I want to consider Paul’s words found in 1 Cor 1:10 – 2:5.

There are some well-known verses embedded within this early section of Paul’s letter to the church in Corinth:

And I would say this particular ‘section’ continues through the end of ch.2, particularly looking at how God’s wisdom and revelation are given through the Spirit of God. But for the sake of this post, I’ll stop with 2:5. But I want to look at Paul’s ‘message of the cross’ in this specific text, the thing that Paul resolved to know nothing of except Christ crucified.

When many think about the gospel, and subsequently proclaim that evangel, they center the message in the cross alone. And I believe very much that the cross-event is part of the gospel message, part of how Christ was enthroned as King over all, also providing payment for the sin of humanity. But I would not say it is the only part of the gospel. But you can read about this in other articles I’ve written.

Are you kidding me? That’s what the cross is about, isn’t it?

Again, yes, the cross is about provision for forgiveness of sin. But that is not the only point of the cross. And that is one thing Paul is emphasizing here with the Corinthians.

What’s Paul getting at here, then?

follow me for a moment. I’ll try my best to clarify what I believe Paul is putting forth.

Corinth was a church ripe with division. That’s why Paul makes such statements as found in 1:10-12. There is a huge call in vs10, a call to unity beyond what you might see in your average local church, to say the least. And it’s very similar to the vision he sets forth to the Philippians (in Phil 2:1-11) and Ephesians (in Eph 4:11-16). Paul had a pretty passionate vision of what God meant when he meant the ekklesia. More than an institution; more than a social appointment on the calendar; more than a building. A living and breathing body covenantally committed to one another in Christ.

And so, here, we read that the Corinthians are divided in allegiance to the person who has baptized them. They’ve had 3 apostles involved in this church – Peter, Apollos and Paul (yes, Apollos is an apostle). Who was more important to be baptized by and follow? Paul says that none of the 3, for Christ is not divided.

And this baptismal debate hardly touches on all the problems and division – there is a case of incest, taking one another to court, abuse of the Lord’s table and spiritual gifts, and a very unsound resurrection theology. My encouragement every time I think about the Corinthian situation is that Paul did not shut this church down, but rather had hope for them, giving them correct teaching and practical instructions on how to move forward. Such comfort for church situations today.

But back in the early part of the letter – Paul is addressing division. He moves from a connecting statement in 1:17 to give some thoughts about his message of the cross. This message was absolute foolishness to the world, but it was (or was to be) the power of God for God’s people.

Now, for Paul to state the cross was foolishness, this does not mean it was unreasonably ludicrous. It was simply foolishly counter-cultural, contra to how the world understood one’s power to be greatly displayed. The power of the King expressed in humiliation of a death sentence.

No, not really. It simply is not the way God shows he is King over all. It simply isn’t the way he has chosen to bring his good rule on earth as it is in heaven.

Moving on down into 1:22, Paul distinguishes between what Jews and Greeks want to see. Jews enjoy a spectacle of miracles (check these passages in the gospels – Matt 12:38-39; Mark 8:11; Luke 11:16; Jn 6:30). And Greeks lust after wisdom, with their great fathers such as Socrates, Plato and Aristotle.

But whatever our selfish desires, the first century had theirs as well, which had manifested itself in Corinth. Jews wanted signs; Greeks wanted wisdom.

This was his and his team’s message alone. They were going to remind the Corinthians (a power divided church) of the death of Christ on the cross. Yet, in this reminder, Paul is not giving them a soteriological (salvation-based) understanding of the cross. Nothing about blood, atonement, forgiveness, etc. We can try to make the passage about such, but read the passage. It simply is not there.

Rather Paul’s message about the cross is very clear to the Corinthians – Christ [is] the power of God and the wisdom of God (1:24).

Here was a church divided over varying issues such as the importance of the person who baptized them, and much more. You’ve got two groups – Jews and Greeks – with one group boasting in miracles and another in great sophia-wisdom. Paul says it is all rubbish when it comes to the ways of our God and his Christ – For I resolved to know nothing while I was with you except Jesus Christ and him crucified (2:2).

I think we have easily lost the shock-factor of the cross. The cross truly is offensive. But the problem is that, with nice jewelry, beautiful stained-glass depictions, and graceful pictures of the cross, we can miss what the cross is all about. And I like those practical reminders.

However, if I can put it this way, the cross was the equivalency of the electric chair today.

Imagine wearing a piece of jewelry around your neck in the shape of an electric chair. Not so charming, is it?

I did a search in Google images to see if a picture would come up of Jesus sitting dead in an electric chair. A few of them did come up. It was quite disturbing to look at. But I believe that is exactly what’s supposed to happen when we look at the cross.

It’s not about a few specks of blood here and there. It’s not about pretty jewelry or light-hearted pictures. It was all about capital punishment. It was all about the brutal murder of the eternal Son, as a criminal. It was about Jesus Christ’s punishment, though he deserved none of it. The liters of blood, the crown crammed onto his brow, the numerous lashes across his body, the screams at the top of his lungs, the exhaustion, the breaking of flesh by hammer and nail, the true passion.

Pretty shocking, to say the least.

And Paul says this is how God, the God we say we belong to, decided to display his power and wisdom. That’s what he is getting at in these first few paragraphs of his letter to the Corinthians.

You want power? Such is not primarily found in miraculous signs. You want wisdom? Such is not found in great sophia-wisdom of the fathers. It’s found in the bloody death of his Son.

It’s not like God is against miracles. He has one plenty of them, especially in his Son, and continues to enact such amazing feats. Nor is he against learning, knowledge and wisdom. Paul would probably put us to school today, even quoting from some of those well-known pagan Greek philosophers in making the evangel known in his day.

But that is not the foundation of God’s power and wisdom. The foundation is Christ, or more fully, Christ crucified.

And this is now how Paul expected the church of Corinth to live – in light of Christ crucified as God’s display of his power and wisdom. Division would remain if they did not live in accordance with the reality of the cross of Christ.

This is simply how it works in the kingdom of God, which is 180 degrees counter-cultural to our world.