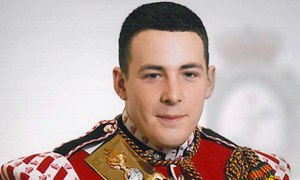 As most will know, just a few days ago, on the east side of London in Woolwich, a terrible incident of terror took place. Drummer Lee Rigby was killed in a brutal machete attack.

And a great wave of Islamophobia rises once again.

But should it? Is this really how Muslims are to be understood?We, in the west, find it quite difficult to imagine that Islam has any ounce of peacefulness within it. We recall events such as 9/11, the London bombings of 2005, oppressive stances towards women and non-Muslims in the middle east, burnings of church buildings in countries with a larger Muslim contingency, and most recently the Woolwich incident. And these are only incidents of the past 10+ years.

But is it possible that what recently happened in Woolwich, or the projected stereotypes that arise after any incident, does not tell the whole story?

You know, kind of like Christians don’t want to identified with Anders Breivik, from the 2011 Norway attacks. We don’t want to be identified with fundamentalists that attack those going in and out of abortion clinics (though we grieve in our hearts regarding the act of abortion). And we definitely don’t want any association with atrocities such as the Crusades, Spanish Inquisition, killings of Anabaptists simply for re-baptising people as believing adults, and the way Native Americans were treated by many explorers identifying themselves with Christ.

Of course, this is part of the Christian history, whether we like it or not. We can argue that certain folk were not actually Christians, not living out the life to which Christ has called his people. I understand that. But it still exists on our record sheet. And we are both sad knowing that our own history bears these accounts and grateful that the gracious work of God in Christ continues in spite of our dark failures.

Here is an important point to remember: We are increasingly becoming aware that not all Muslims embrace extreme fundamentalist, even terrorist-jihadist, views of Allah and the Koran. There are Muslims who believe that the teachings of the Koran are most certainly concerned with mercy, forgiveness, peace, righteousness and justice (by ‘justice’, I mean that which is good, right, fair and equitable rather than ideas of ‘holy war’ on God’s behalf).

And, so, Dr Hasan tells a bit of his story in the BBC article:

I spent two decades, starting in my teens, as an activist promoting these narrow and superficial misinterpretations of Islam in the UK, along with thousands of others here and millions in Muslim-majority countries, until deeper and wider experiences of faith and life helped me out of these intellectual and spiritual wastelands.

These discourses need to be defeated, and the developing counter-narratives to these worldviews and mindsets need to be strengthened.

By fundamentalism, I mean the reading of scripture out of context with no reference to history or a holistic view of the world.

Specific examples of literalist, fundamentalist readings that still dominate Muslim attitudes worldwide are manifested in the resistance to progress in human rights, gender-equality and democratic socio-political reforms that are too-often heard from socially-conservative Muslims.

Many are aware of the ideas of jihad (holy war) and Sharia (moral code and religious laws). We, as westerners, and especially Christians, can be quite fearful of these notions. They bring to mind terrorism and forced obedience to Islam. Remember, ‘Islam’ means submission, and the word only brings up concepts of oppression.

However, Dr Hasan goes on to elaborate on these two issues of jihad and Sharia:

The Koranic spirit of freedom, equality, justice and compassion must be reclaimed, with an emphasis on Sharia as ethics rather than rigid ritualism.

The Koranic notion of Jihad is essentially about the sacred and physical-spiritual nature of life’s struggles, as summed up by “strive in God”, a verse revealed in the pacifist period of Islam before war was permitted.

Of course, I suppose that many can a) see this as superficial to what Islam is really about or b) if there is a re-evaluation of the true spirit of Islam and the Koran, we are decades (if not centuries) away from great change. But for starters, I would argue that this isn’t superficial, as Dr Hasan clearly shows. And, two, it might take some time. But it looks like we are headed on a positive path for change. 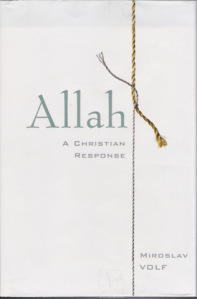 One helpful book on the topic is Miroslav Volf’s work, Allah: A Christian Response. He is well-known for his exceptional work of peace relations in our world today. And this book is particularly around Christian-Muslim relations.

Volf was raised in communist-atheistic Croatia but was also part of a small Christian community, his dad being a Pentecostal minister involved in much work amongst Muslims. Considering his specific upbringing, Volf lets us know that he is not out to consider things soteriologically (the doctrine of salvation, and thus, whether Muslims are ‘in’ or ‘out’). His desire is to mainly approach the topic through theo-politically, or how Christians can faithfully understand and engage with Muslims in our pluralistic world today. I posted my review here.

But as we read and engage with Muslims a little more in our world today, we might notice a little different perspective than we first imagined. Many (I suppose most) do not embrace the fundamentalist ideas of Sharia and holy war. Again, this is highlighted when reading Dr Hasan’s article. There are actual Muslims, actual Muslim leaders, who do not embrace extremist ideas.

Hasan himself explains an underlining reason for Islamic fundamentalism:

By fundamentalism, I mean the reading of scripture out of context with no reference to history or a holistic view of the world.

This is not too unlike what Christians have had to engage in over the past few centuries with our own Scripture. We are to read holy Scripture in light of its historical context, recognising some of the parameters of God’s revelation coming forth in an ancient, patriarchal context. Many Muslims are engaging in this same practice today.

Maybe it’s time we take a step back from our stereotypes and prejudices towards Muslims in general. Let’s not view Muslims through the lens of varying people or groups that embrace a more extreme fundamentalism. Over the years, I’ve met some quite peaceful Muslims who, from what I can tell, believe the Islamic faith is based in peace, mercy, forgiveness and equity. And as I reminded us, as Christians, I think we would desire the same treatment as well, not being identified with the atrocious acts marked in our own history books.

I believe this will help us as we move forward in the 21st century, even as we look to be the sweet aroma of Christ and the gospel amongst our Muslim neighbours.

3 thoughts on “Woolwich Incident Does Not Tell the Whole Story”