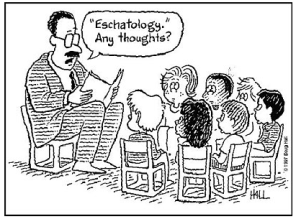 Within the discussion around eschatology (the topic of last things), there are a few different perspectives one will find amongst Christians. First off, one could approach the topic by discussing the millennium – the thousand year reign of Christ mentioned in Rev 20:4-5. One might hold to:

I find myself leaning more towards an amillenial view. I can only see Christ as reigning now, since he as much said that all authority in heaven and on earth belongs to him (Matt 28:18). And, within Jewish apocalyptic literature, under which Revelation falls, the number 1,000 is representative of a long, long time. Kind of like we’d say today – A billion years! We don’t always see the reality of Christ’s reign on earth as it is in heaven. In some form and fashion, he will finalise it one day. But, by faith, I am settled on the fact that God has made Jesus both Lord and Messiah. Reigning at the Father’s right hand stands as a proclamation that Christ is truly reigning, though one day every knee will bow and every tongue confess.

Still, the millennial discussion not withstanding, there is another perspective one could look at in regards to eschatology. This falls into mainly 3 categories

Most popular theology is focused on a futurist perspective, but I lean more towards a preterist perspective. I think if one understands the Scripture from its historical narrative framework – within an ancient, Jewish perspective – you’d be surprised at how different our worldview is from theirs, including their approach to the prophetic. Things were a lot more focused in on their time, not our time.

One major passage within the discussion of ‘last things’ is what theologians call the Olivet Discourse. Though this speech of Jesus can be found in the 3 synoptic gospels, most focus in on Matt 24-25 (the parallel accounts are 13 and Luke 21).

It’s very easy to read the record of Jesus’ words in a place like Matt 24 and think this is simply future, way down the line. This is also made easy when one works from a futurist, premillinneal perspective – where just about every prophetic statement refers to something future, even for us today.

But there is a very strong case that Jesus’ words in Matt 24 speak of something that took place within a few decades of his own death and resurrection. The fulfilment of Jesus’ words came about through the Jewish-Roman War of AD 66-73, culminating in the destruction of the temple in Jerusalem. This was an act of judgment within history upon apostate Jews.

And, so, last week, I came across this interesting quote in regards to a particular characteristic of Matt 24. The quote supports a more preterist perspective.

“Notice how many times Jesus uses the word you (second person plural) in Matthew 24… Now, if you heard Jesus say that all these things would happen to ‘this generation,’ and in every other instance of its use ‘this generation’ meant the present generation, and you also heard Him speak of when ‘you’ see these things, what would you conclude?”

Personally, I think it’s hard to get away from the perspective that Jesus’ words in Matt 24 happened quite a while ago. Has everything been completed in regards to the prophetic perspective of Scripture (i.e. what is known as full preterism)? No. But, if we get back into understanding passages like Matt 24-25 within its first century, Jewish context, I think it’s not too complicated in noting that Jesus was speaking of a generation within his own death and resurrection.

‘This generation’ lived a long time ago.

10 thoughts on “This Generation Lived A Long Time Ago”