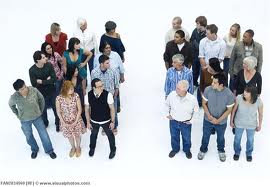 I don’t know if many of you are aware of the divide that is taking place more and more within evangelicalism, or at least American evangelicalism or the wider evangelical church of the west. The polarization between two main groups of people. This has been going on for the better part of a couple of decades, but it has especially gathered some speed over the past few years.

What is this divide?

On one side, you have those of classical evangelicalism, or more definitively, neo-reformed evangelicalism. This group is represented by such people as John Piper, The Gospel Coalition, Justin Taylor, Kevin DeYoung, Al Mohler and possibly a few others.

On the opposite side, you have those who are becoming less tied to the traditional forms of evangelicalism, and specifically challenging the views of those of the neo-reformed perspective. Within this group, you will find a variety of names at the forefront, like N.T. Wright, Scot McKnight, Peter Enns, BioLogos and a few others.

The divide stands over issues such as these:

There might be other issues to consider, but those are very central in the divide.

The neo-reformed folk argue something like this for the 4-bullet points above: a) the gospel is about God’s saving and forgiving of sinners through Jesus’ atoning death on the cross, b) justification is another aspect of salvation in which God’s righteousness is imputed (given) to unworthy sinners, c) hell is eternal conscious punishment-torment, and d) theistic evolution is a very dangerous approach to origins, as it can lead to the denial of very central Christian doctrines.

The ‘new perspective’ folk contend these positions: a) the gospel is about the coming of the kingdom rule of God in Jesus, as the fulfilment of Israel’s story, b) justification is not so much about God’s saving of sinners, but rather God’s declaration upon those who are already his covenant people, with the righteousness of God being more about God’s own faithfulness to his covenant purposes rather than something ‘imputed’ to believers, c) God’s judgment upon sinners is that of actual, physical death, with the judgment fires of hell being about the consuming of non-believers, and d) theistic evolution is a very plausible, if not true, belief for Christians as to understanding our origins.

Some distinctions worth noting, right?

I find myself falling in line with the latter group, though I must admit I was very much in line with the former group only a few years ago. And I do also note that I learned quite a bit from more neo-reformed folks like John Piper, Wayne Grudem and those at the Gospel Coalition. I cut my theological teeth on the reformed stalwarts of our present day. And this became even more of a reality as I studied at one of the leading reformed-Presbyterian seminaries in America – Covenant Theological Seminary.

But as I became aware of other varying theological perspectives outside of the conservative, reformed (and American) point of reference, I was intrigued, drawn in to learn from others. I must admit, I longed for something fresh. And this is what I found as friends introduced me to N.T. Wright, Scot McKnight, Peter Enns, Kenton Sparks, J.R. Daniel Kirk, BioLogos and a few others.

This divide is practically expressed on quite a regular basis, like in such a recent review by the Gospel Coalition of N.T. Wright’s newest book, How God Became King. I read the review and am very much perplexed at how such could have been written. I’m thinking they didn’t read the same book as I (or, what really probably happened is that they headed into the book already knowing they couldn’t agree with but 10% of anything said). Or I, myself, pick up Wright’s newest work and frequently come across critical statements about neo-reformed evangelicalism and American politics. I, though being American myself, tend to also be critical of such perspectives. But I’m learning, at least slowly, to grow in grace and listen to and be gracious towards views not my own, though I might not still come to the same conclusions.

Being critical and challenging is not about bashing, nor adding in a little jab of snide remarks here or there. At times, it might be about strong rebuke and vigorous challenges (maybe like InternetMonk’s robust challenge to the bashing of ‘effeminate worship’). But I am wondering if, even longing for, this divide to lessen, to narrow, rather than keep heading towards an unimaginably wide chasm.

And that’s my whole point in this article. It’s not so much about arguing which view is better. Rather it is to both call out the divide that is taking place and share my desire to seem kind of closing of the gap through some efforts in reconciliation. Is there a way to better listen to one another, learn from one another, hold back snarky and overly-critical comments, for movement towards some kind expression of Christlike unity?

You know, when I read Wright’s book, Justification: God’s Plan and Paul’s Vision, and then read Piper’s book, The Future of Justification: A Response to N.T. Wright (this book actually came first, challenging Wright’s previous works on Paul and justification), I really think there was a lot of common ground from which to work. But as Krish Kandiah, British church leader and blogger, notes: ‘these men do tend to talk past each other when they engage’.

And this is true of many of those on opposite sides of this ever-increasing chasm.

I am not so much asking for people to change their theological perspectives. Well, I think it a worthy project to evaluate our theology and be open to the need for changes in our paradigms, as I’ve seen this become a reality in my own life the past few years. But I am asking for better talk across the table. I even imagine a day, in the not too distant future, where John Piper, Justin Taylor, Kevin DeYoung, Al Mohler and a few other neo-reformed folk will sit down with Tom Wright, Scot McKnight, Peter Enns, JR Daniel Kirk and a few others to have 2 or 3 days of deep dialogue and discussion of how the two groups can better understand one another and even how we might move forward together.

I know. Sounds a bit adventurous, maybe a bit too big. But I think it can be done. And I put forward my ‘vote’ to see it happen, all that the divide closes and we move more towards the kind of unity expressed in passages like Eph 4:11-16.

21 thoughts on “The Divide in Today’s Evangelicalism”