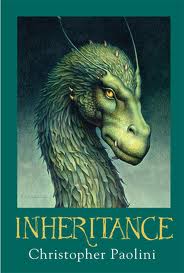 I’m just finishing up an intense fiction-epic series known as The Inheritance Cycle, a 4-book sequence of 2800+ pages authored by Christopher Paolini. It’s in the vein of something like the Lord of the Rings or Harry Potter. I love fantasy fiction and so I was easily drawn into this series.

There was one beautiful little section I wanted to quote here, which gives insight into the series, but also speaks into some of the things worth considering with regards to the perspective of the ancient Hebrews-Jews who crafted the Scriptures.

Here is a little background to the characters referred to in the section I shall quote:

And now to the selection from the book:

At long last, Saphira detected a slackening of the wind – slight but noticeable – and she began to prepare to fly out of the stream of air.

Before she could, the clouds above them thinned, and Eragon glimpsed a few glittering specks: stars, white and silvery and brighter than any he had seen before.

Look, he said. Then the clouds opened up around them and Saphira rose out of the storm and hung above it, balancing precariously atop the column of rushing wind.

Laid out below them, Eragon saw the whole of the storm, extending for what must have been a hundred miles in every direction. The center appeared as an arching, mushroom-like dome, smoothed off by the vicious crosswinds that swept west to east and threatened to topple Saphira from her uncertain perch. The clouds both near and far were milky and seemed almost luminous, as if lit from within. They looked beautiful and benign – placid, unchanging formations that betrayed nothing of the violence inside.

Then Eragon noticed the sky, and he gasped, for it contained more stars than he had thought existed. Red, blue, white, gold, they lay strewn upon the firmament like handfuls of sparkling dust. The constellations he was familiar with were still present but now set among thousands of fainter stars, which he beheld for the very first time. And not only did the stars appear brighter, the void between them appeared darker. It was as if, whenever he had looked at the sky before, there had been a haze over his eyes that had kept him from seeing the true glory of the stars.

He stared at the spectacular display for several moments, awestruck by the glorious, random, unknowable nature of the twinkling lights. Only when he finally lowered his gave did it occur to him that there was something unusual about the purple-hued horizon. Instead of the sky and the sea meeting in a straight line – as they ought to and always had before – the juncture between them curved, like the edge of an unimaginable big circle.

It was such a strange sight, it took Eragon a half-dozen seconds to understand what he was seeing, and when he did, his scalp tingled and he felt as if the breath had been knocked out of him.

So it would appear, Glaedr said, but he seemed equally impressed. I heard tell of this from a wild dragon, but I never thought to see it myself. (p478-479)

How the creative Artist designed this world and universe, I don’t think we could ever fathom it. We have been exploring it as best we can for millennia. And we might continue even into the age to come.