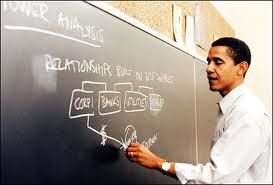 Interesting how things get around on the internet these days, heh? Twitter, Facebook, YouTube, Google+ and all the other possibilities. If it weren’t for blogging and these other social media outlets, we probably would have not known as much about something like Rob Bell’s recent release, Love Wins. Nor would there have existed the more recent mania over the video Why I Hate Religion, But Love Jesus (now sitting at some 18.5 million hits on YouTube).

But there is an even newer legend floating around on Facebook these days, one about economics and socialism. It is a ‘myth’, meaning it is a story given to try and relay truth.

An economics professor at a local college made a statement that he had never failed a single student before, but had recently failed an entire class. That class had insisted that Obama’s socialism worked and that no one would be poor and no one would be rich, a great equalizer.

The professor then said, “OK, we will have an experiment in this class on Obama’s plan”. All grades will be averaged and everyone will receive the same grade so no one will fail and no one will receive an A…. (substituting grades for dollars – something closer to home and more readily understood by all).

The second test average was a D! No one was happy. When the 3rd test rolled around, the average was an F. As the tests proceeded, the scores never increased as bickering, blame and name-calling all resulted in hard feelings and no one would study for the benefit of anyone else.

To their great surprise, ALL FAILED and the professor told them that socialism would also ultimately fail because when the reward is great, the effort to succeed is great, but when government takes all the reward away, no one will try or want to succeed. It could not be any simpler than that.

Remember, there IS a test coming up. The 2012 elections.

These are possibly the 5 best sentences you’ll ever read and all applicable to this experiment:

1. You cannot legislate the poor into prosperity by legislating the wealthy out of prosperity.

2. What one person receives without working for, another person must work for without receiving.

3. The government cannot give to anybody anything that the government does not first take from somebody else.

4. You cannot multiply wealth by dividing it!

Doubtless this story actually happened. Again, it is a kind of parable, maybe ‘myth’, given to teach us something.

But, the thing is, I don’t believe it teaches us all too well.

Now, I am no economist nor have I dealt with great depth in the arena of the political sciences. But I have lived in 3 differing lands who practice life somewhat different from one another – my beloved homeland of the US, the UK and am currently living in Belgium. And I’ve travelled to a few other varying nations, in both the developed and developing world. I typically would suggest living outside the US for at least 6 months would be quite eye-opening. But this would be true of any person from any particular land. We learn so much outside what is the norm.

Of these 3 lands where I have made my abode, Belgium is the closest to a socialist perspective, at least with regards to the economy and healthcare (though I would argue the UK’s NHS seems somewhat socialist to me). Now, having said that, I recognise socialism is a bad word, at least for many Americans. There is no doubt that socialism can be harmful, i.e., as in seeing it head too far towards a full-blown communism, with the government dictating how ALL goods and services are to be spread amongst the people.

But this is one small picture of how a socialist perspective works, an extreme setting that brings to mind a sort of Russian Soviet Union from decades past.

And so, living in western Europe for a few years now, I can tell you this storied account above really doesn’t capture how things fully work in Europe, especially noting that communism has not settled here. Let me explain 2 simple differences between capitalism (i.e. in the USA) and socialism (i.e. in Europe).

Of course, there are pro’s and con’s, positives and negatives to both sides. It’s true of any system, of any ‘-ism’, because it is just that – a system. And life tells us that everything does not fit nice and neatly into systems, whether economically or theologically or politically.

So, with socialism, it is true that people can take advantage of the system, getting a free-ride and never giving anything back to the ‘system’. And that is the fear of many, at least in the US, with the other fear being the allowance of the government to make the decisions of how private money is distributed. But, within the capitalist framework, you have just as many problems. For example, it is very easy for the big business to come in and stomp out the mom and pop store. There is nothing really to protect such, like in a socialist society. Wal-mart, Best Buy, Starbucks, etc, will usually win out.

Interestingly enough is that most Americans don’t realise that they appreciate a socialist perspective already when it comes to the arena of education. We argue that it is the RIGHT of every person to be educated without having to pay a ‘personal penny’, at least up to the age of 18. This is covered within our tax structure. And not too many have a problem with such.

And so, to consider this perspective with regards to healthcare and other economic policies should not be seen as inherently evil. If it ‘works’ within education, though it has its pitfalls, it could work in other areas of life. And we definitely don’t need a Tea Party to rouse us all towards another McCarthy era, though I don’t see too much paranoia but rather simple over-reaction.

So, a socialist perspective could be helpful in providing certain goods and services as the RIGHT of all people. Well, it is helpful, as in Belgium, though again not perfect by any means (remembering the capitalist structure in the US isn’t always perfect either).

But my whole point is to note how this Facebook legend above is not a helpful or faithful explanation of the situation. It is a poor caricature that has capitalised on the ridiculousness of the extreme. And speaking of the poor, as one friend recently remarked, we kind of think that, if people will just pull themselves up by their bootstraps and work a little harder, their situation will change for the better. God helps those who help themselves, right?

Well, actually, God helps the poor who recognise they cannot help themselves. Not just the poor ‘in spirit’, though it does start at the heart. But the literal, actual poor. The good news was to be proclaimed to the poor of all levels. And so the mess of poverty is not, at times, simply solved by working harder. It is at a more systemic level. There are layers and layers, decades and decades of poverty that have to be overcome, that have to be broken through. Come to Memphis and let me show you. Or go to any inner-city. Or fly with me to visit my friends in Zambia and Zimbabwe.

Sure, some want a free ride. Sure, some take a free ride. But maybe they take the free ride because they know nothing else. We argue that we should be able to do as we please with our own funds. But we divvy it out to a 501c3 corporation (or ‘church’), get the tax deduction and get on with making money, to compete against everyone else, possibly buying out the local shop so that we can come in to make more and more and more.

Ok, now I am starting to give my own caricature.

You see how it works both ways?

The Facebook story above tells a very small percentage of truth. Just as my emphasis started heading too far the other way.

But, yes, I do believe poverty is more of a complex, systemic problem than simply down to laziness. I know plenty of Zambians that probably long to have the money that a poor, inner-city Memphian has. Their poverty is much more than American poverty. But I can’t just look at them and say, ‘Work hard enough if you want health coverage.’ All the while, the mother recently died giving birth to the child, whom also died.

All of a sudden it seems that pooling resources together is an option at least worth considering.

In the end, capitalism and socialism both have their positives. And they both have their negatives. But remember that we cannot label socialism as inherently evil, inherently anti-democratic. It can work. It does work. Whether it will work in the US in other arenas outside of education, or ever really come more full-swing in the US as in Europe, is a different story. As with education, though people take advantage of the system and pass when they shouldn’t, you find plenty of people coming through with flying colours because we said it is the RIGHT of each person to receive an education. Maybe we could consider this within the framework of healthcare and other areas of the economy. It won’t necessarily lead down the slippery slope of full-blown communism. Rather, it might be a blessing to both poor and rich.