It’s time for the first post of the new year regarding my series on the gospel and evangelism, though this is my sixth post overall. So far, as I have looked to address what the gospel is all about, I’ve posted these articles:

With this new segment, I’m going to take a little unexpected turn. It’s part of my long-winded nature, which might carry on into a side excursus in the next article. But this is something about which I am very impassioned.

I am currently preparing to teach on the book of Genesis for a trip to a ministry training college we work with in Lusaka, Zambia. In doing so, I have been thinking about ‘first mentions’ of particular words in Scripture. You see, there exists a rule within biblical-theological studies that, if you plan to study a particular word or theme in Scripture, the best thing to do is start where it was first mentioned.

So, specifically with the gospel, theologians usually recognise that the first reference (though not first mention) is found in Gen 3:15: 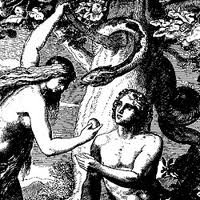 And I will put enmity
between you and the woman,
and between your offspring and hers;
he will crush your head,
and you will strike his heel.

You see. No mention of gospel (Hebrew besorah, Greek euaggelion – but you knew that already).

This verse is usually identified as the protoevangelium, which is Latin for first gospel. Now, there is discussion as to whether this verse is actually about the gospel. Of course, the early Hebrew community, to which this was written, would not have initially recognised this as speaking of a more defined gospel message. But let’s grant that it is very much worth considering this passage as protoevangelium through a new covenant lens, also noting that Paul seems to harken back to this important passage in his short statement in Rom 16:20.

The God of peace will soon crush Satan under your feet.

Interesting imagery, which would remind any Jew of that pronouncement in Genesis, though Paul appropriates this towards the church-ekklesia in Rome, who were ‘in Christ’. And, of course, all the promises of God find their fulfilment in Jesus Christ (ala 2 Cor 1:20).

So I am comfortable to find room within the perspective that Gen 3:15 is an initial seed statement in regards to the gospel.

And what is interesting to note about this passage is that it is centred in the seed of the woman defeating the serpent. Or, stated another way, a particularly-prophesied-about seed would establish his rule by ending the rule of the serpent.

You see, what I am arguing is that gospel is centred in the proclamation that God’s kingdom reign has come in God’s Messiah, Jesus. And from that central acknowledgement, also seen in the Old Testament in places like Isa 52:7, everything else flows out from it.

It doesn’t make the cross or resurrection or forgiveness of sin or setting captives free or healing any less significant. Rather, these things are part of the gospel announcement, even being recognised as good news themselves. Well, of course those are very good news!

And as I have made very clear, the works and preaching of Jesus, the humility of the cross (which was foolishness to the world) and the powerful victory of the resurrection were the means by which God established His kingdom rule. Well, God had reigned quite well before the Christ event. But the greatest revelation and expression of his rule had not come until God’s Messiah-King became flesh and walked out the will of the Father.

Now, with Gen 3:15, I do recognise the story of sin, judgment and need for forgiveness is woven into the account. Such exists and to deny it would be foolish. But, as I have reflected on this passage, I believe that what we call the ‘first gospel’ is centred in the proclamation that the prophesied and promised seed would defeat the serpent, thus making very much known who was in charge, who was reigning.

This is the gospel of the kingdom. This is good news that our God has come to rule, calling sinners to repent and restoring those who heed the call.