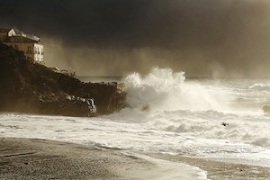 Matthew’s Gospel begins with the story of the Old Testament. We don’t  really see this today when we read those first 17 verses of chapter 1. Eesh!! Names!! But Matthew is communicating that this is the continuation of the story.

The account quickly moves into the birth of God’s Messiah-King and into the beginning proclamation of the gospel of the kingdom.

Then, the rest of the Gospel gives us God’s Messiah-King, Jesus, teaching us the ways of the kingdom and displaying the power of the kingdom.

The first major teaching section is known by the title the Sermon on the Mount. This might be one whole setting or a collection of settings put together in one ‘sermon’ (or homily) format. But what we find in Matthew chs.5-7 is foundational to what it means to live out the rule of God, not just as individuals, but as a whole people of the kingdom.

‘You’ve heard it said……., but this is really and centrally what it means to live in accordance with God’s rule and reign on earth as it is in heaven.’

And Jesus ends out by comparing two types of people in Matt 7. A well-known passage, no doubt. I think the comparison actually extends not just from vs24-27, but from vs15-27. And, at the end of it all (vs28-29), the people are taken aback by the authority by which God’s Messiah is teaching. They’ve never heard such before. This is something different from the status quo.

Maybe they ought to get used to responding that way when they hear Jesus teach and see Jesus display God’s power.

I preached on this passage this past Sunday, continuing on from what I had spoken on the Sunday before regarding the unshakable kingdom. But, as I re-studied this passage of Matthew and preached it, I specifically saw 2 interesting contrasts between the two people of this passage. Not so much that one built on the rock and the other didn’t, though that is very true. But here are the 2 things that have caught my attention.

1) Both hear the words of Christ

Read vs24 and vs26. Both hear the words of Christ. It’s just that one responds correctly in building, one responds incorrectly.

Knowing they both hear the words of Jesus, I’m thinking these words being by speaking into the context of those who already identify themselves as God’s people. Matthew presents a Jewish Messiah who mainly came to communicate the gospel of the kingdom to a Jewish people. That is central to Matthew’s Gospel. God-in-the-flesh steps in an begins to speak to His people first.

While, for some, it is helpful, I think it is missing something as to what the gospel actually proclaims when God makes transformative new creation in our midst. And to continue to proclaim the evangel-gospel is not firstly to remind us of who we are, but to remind us of who our God is, that God is ruling and reigning. And, if we believe this gospel of the kingdom that God is in charge, this is how we respond – by seeing God’s grace empower us to build as on an unshakable foundation.

If not, God will shake (today and ultimately one day). God is pleased to shake (that’s the language of Heb 12:25-29). Or in the words of Jesus in Matt 7, God likes to see storms brew (check out the description of God in Ps 18). But this is for our good – to see something unshakable and lasting established on earth as it is in heaven. That’s where we are headed in the end.

So, both persons hear the words of Christ – centrally the gospel of the kingdom, but all that this entails in living out the ways of the kingdom. But only one responds by building correctly.

Such a sad situation to hear the words of Christ and not adjust the way we build.

2) Both have something to show

Both persons have a house. They have something of which they have invested time, money and resource. Ladies and gentleman, look at this edifice.

I think Belgians might understand the importance of this teaching even more. In Flemish, they have a saying around here that goes something like this: Een Belgische man is geboren met een baksteen in zijn buik.

A Belgian man is born with a brick in his stomach.

Because they love to build houses (well, each one building one house). And when they build one, they really don’t plan on moving EVER. It’s there’s for life, if not also for their children.

A house is important. It stands for pretty much all you have. And back in those days, this wasn’t just about a brick edifice. It was much bigger, much more important. This was about your family, your heritage, your investment, your resources, your possessions. It pretty much spoke of all you have.

Both had something outstanding to show. But only one house ended up standing for good.

And this is why I believe there is a connection from vs15 all the way through to vs27.

Vs21-24 tells of people who have some pretty spectacular things to show. They are claiming the prophetic and the miraculous. But Jesus is not simply interested in that stuff.

Are you kidding me?!

People are going to stand before Christ one day and will have accomplished that stuff, thinking it was in his name, and Christ will simply look at them and say he does not know them.

We all have something to show forth, even amongst those who already claim to be of God’s kingdom and God’s people.

But what we have to show must stand up, must remain unshakable. Look at vs25 – The rain came down, the streams rose, and the winds blew and beat against that house; yet it did not fall, because it had its foundation on the rock.

There are some harsh things that happened in this storm. Storms coming from up (rain), down (flood) and the side (wind). But the first remains standing. This one built correctly, this one built something lasting, in accordance with the rule of God.

Both persons heard Christ speak and they had something to show in their life. It seems all was well for both.

But not really. Something stood, something didn’t. One remained, one didn’t.

It is a tragedy in the midst of God’s people that some never respond and build according to the words of the King. For many, it already shows in this present age. But, if not now, it will one day show. And for some, God keeps shaking and storming as a gracious Father to help us correct the way we are building. But we never stop and ask why things keep crashing and how we can adjust. We just go back to what we know. And it shows over and over and over.

As I said, God’s shaking and storming is a gracious response of a loving Father, whether that shaking-storming is large or small. It is giving us the opportunity now to reconsider how we build. Our God is committed to shake and storm because He is committed to seeing an unshakable kingdom established. Check out Heb 12:27-28.

How are we going to respond?