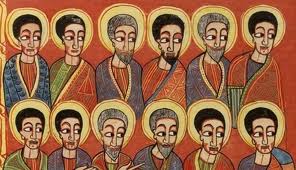 I recently posted about a new book I have begun reading, a book on the modern-day ministry of apostles authored by British church leader, David Devenish – Fathering Leaders, Motivating Mission: Restoring the Role of Apostle in Today’s Church. Remember, I am one of those guys (not the only one) who believes this role (along with all ministries spoken of in Eph 4:11-13) to be very important in seeing the people of God equipped for works of ministry and preparing them to move towards maturity. At least that’s how Paul articulates it in Eph 4.

I’ve spent plenty of time laying out why I believe this ministry (yes, ministry, not so much ‘office’ or ‘position’) is still active today, as well as what this ministry would entail today (here is the link to my detailed PDF document).

But as I was reading Devenish’s book, he brought out two points that I never really considered before as to why apostles would exist today, or post-first century. They are not major, eye-openers as to solve the debate that might exist for some Christians. Nevertheless, I thought I would share those two points below, and then encourage you to read more of my thoughts if you would like.

1) The presence of false apostles

In the latter part of what we call Paul’s second letter to the Corinthians, Paul spends quite a great deal of time informing the church about the work of some false apostles (or super-apostles, as a kind of sarcastic name for them). He says this:

12 And I will keep on doing what I am doing in order to cut the ground from under those who want an opportunity to be considered equal with us in the things they boast about. 13 For such people are false apostles, deceitful workers, masquerading as apostles of Christ. 14 And no wonder, for Satan himself masquerades as an angel of light. 15 It is not surprising, then, if his servants also masquerade as servants of righteousness. Their end will be what their actions deserve. (2 Cor 11:12-15)

But here is my question, or Devenish’s question: If there was a set number of apostles, say the 12 and Paul (and maybe adding in a James and Barnabas), why would they need to warned about false apostles?

If there was a recognised and set group of apostles, there would be no need to warn against false apostles, since the group would have been clearly known and set. Maybe that’s simplifying things too much. But to give such a warning against false apostles, I believe this shows that the ministry was much wider and organic than we first thought. It wasn’t as easy as identifying a group of 12 or so men and getting on with building the foundations of the church. I believe Paul and the others knew that other such apostolic ministries were present and would one day be present within the church. Of course, the apostolic foundation that we now have in our New Testament gives us a very proper and healthy foundation to help us now identify real apostles and false apostles. But this dynamic and needed ministry was already widely expanding in Paul’s day, hence the need to warn against these false and ravenous wolves.

Therefore, I believe we need to recognise this ministry as foundational and important today. Not moved from the original apostolic foundation, nor meaning we pen another letter to a church and stick it between 2 Corinthians and Galatians, not to mention we need to weigh those claiming apostolic ministry today against that original apostolic foundation. But this is a very needed ministry gift today, at least as Paul tells us of its importance in places like Eph 4:11-13.

2) Apostles alongside all other giftings

Remember, and I’m passionate about this – those 5 roles in Eph 4:11-13 are first and foremost ministry roles, not so much titles or positions. Whether or not people want to recognise one as an evangelist or teacher, if that is the particular ministry role Christ has given them, then they will get on with that ministry. You cannot hire and fire shepherds (though you can CEO’s).

And so, I believe the same is true of apostles and prophets (including that hiring and firing part). I’ve met a few people in my life of which I might recognise an apostolic or prophetic ministry in their lives, but they don’t use those words in connection with their ministry. Fine by me, and maybe fine by God. People didn’t need to recognise Jesus as who he was in order for him to get on with who he was. It was simply in his DNA. The same with those gifted by Christ himself. (Though, I will say that 9 out of 10 times, one gifted in a particular ministry gift of Eph 4:11 will be recognised by other leaders around them.)

And so we again turn to a Corinthian letter, though this time the first. Paul had already listed nine giftings early on in ch.12, gifts that are somewhat more ‘extraordinary’ (please note that I believe all gifts are amazing and necessary in the body, but if you want to argue with me more on this subject, read my thoughts here first). And just a little later, he lists some of these nine gifts with others, as follows:

27 Now you are the body of Christ, and each one of you is a part of it. 28 And God has placed in the church first of all apostles, second prophets, third teachers, then miracles, then gifts of healing, of helping, of guidance, and of different kinds of tongues. 29 Are all apostles? Are all prophets? Are all teachers? Do all work miracles? 30 Do all have gifts of healing? Do all speak in tongues? Do all interpret? 31 Now eagerly desire the greater gifts.

Now, what we would probably acknowledge is Paul is listing gifts that are available to the ‘regular’ church, the whole body. You’ve got teachers and miracles and healing and helping and guidance and tongues (this list is not exhaustive). And all of these are available to the wider body of Christ, right? So, then, why not also apostles and prophets? As I asked before, if there is a fixed number of apostles, never to grow larger, never to grow wider than a group of 12-15 people, why mention this all-important ministry gift in the context of other gifts that Paul is identifying as available for the wider body of Christ? We’ve already got the apostle thing sorted out. We would not need any more in this ministry now nor in the future.

But I don’t believe we could really ever argue such about this ministry. I believe Paul expected this gift and ministry to be available wider than a team of 12 to 15 people. Peter, John and James were working together based in Jerusalem. Paul, Barnabas and team were working from a base in Syrian Antioch. And I’m pretty sure Matthew was working with a team of apostolic ministries from another base, Thomas was working with such a team, and so on and so forth. It’s the nature of the Christ to be outworked this way – an apostolic team of ministries around the world laying this dynamic foundation of Christ and the gospel in the body of Christ. And such was going to be needed in the 2nd century, 8th century, 14th century, and most definitely in the 21st century.

Christ was the great apostle. The Spirit was sent to continue that same exact apostolic ministry, empowering the body to be an apostolic body of which specific apostles would be birthed for the equipping and health of the church. That’s the heart of Christ. That’s the nature of Christ outworked even today in his continuing apostolic ministry amongst his body. What an opportunity for our world today.