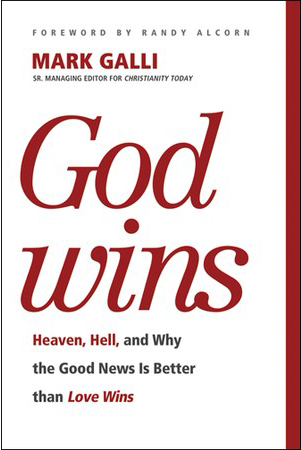 Now that the Rob Bell and the Love Wins matter has died down a few months later, at least in the quicker media avenues (internet, magazines, blogs, etc), we are now beginning to enter the realm of books being published in response to Love Wins.

One book is due to be released the 1st of August of this year. It is entitled God Wins: Heaven, Hell, and Why the Good News Is Better than Love Wins and comes to us from Mark Galli, senior managing editor of Christianity Today magazine.

If you want to read a review of this book (Galli’s, not another review of Bell’s book), then check out Roger Olson’s review at his blog. It is quite a lengthy review, but I do appreciate a lot of what Olson shares regularly on his blog.

Near the beginning of the review, Olson writes:

Before I interact with Mark’s book, let me say that you should read the book for yourself and not take my word for anything–except that it is a serious book deserving thoughtful consideration by both Bell’s critics and admirers.  (Here by “Bell’s” I mean Love Wins’.)

God Wins goes to great lengths to express agreement with much of Love Wins.  Mark does not sweepingly condemn the book or dismiss it as unworthy of consideration.  He has clearly taken the time to read it carefully and try to understand it fairly before expressing disagreement with it.  And his criticisms are, for the most part, generous toward the author.

However, God Wins pulls no punches.  Mark clearly considers it a dangerous book that will probably lead many readers astray–not from Christianity into atheism or anything like that but from a better focused and truer picture of God to a fuzzier and largely erroneous one.

Olson shares quite a few approaches that he disagrees with in Mark Galli’s book, but also understands what Galli is looking to communicate in God Wins. Ultimately, Olson recognises that he and Galli approached the book from two different perspectives. To end my post here, I put the last few paragraphs of Roger Olson’s review.

Let me wrap up. I get the feeling that Mark wants Love Wins to be something that wouldn’t have gotten any attention at all – a rehearsal of traditional evangelical theology. Perhaps he’s right. Perhaps nobody should offer up anything else. (I’m not saying Mark says that, but I wonder how far one could stray from it without being criticized.)  On the other hand, I think Love Wins does push the envelope of evangelical theology. I don’t think it strays into heresy or even flirts with it, but it does intend to shock people out of their dogmatic slumbers into thinking hard about what they believe and it does intend to present them with some possibilities that are outside the evangelical mainstream. How much Bell himself is committed to those possibilities remains something of a mystery, I think.

The strange thing is this. I find myself agreeing with BOTH BOOKS! How can that be? I don’t mean I agree with everything in both books. That would land me in sheer contradiction.

In other words, would Bell perhaps have Mark’s perspective if he were in Mark’s place – trying to preserve biblical faith in a denomination in serious decline due to rampant liberal theology? And would Mark perhaps have Bell’s perspective if he were in Bell’s place – trying to hold out a vision of God’s love in an evangelical world still fraught with hellfire and damnation preachers of God’s arbitrary sovereignty who sends people to hell for his glory? Well, maybe not. And I suspect both authors will think I’m belittling them which is not my intention. I take them both seriously. I just wonder if they are both right given their contexts and perspectives?

I encourage you to 1) read Olson’s full review here and if you can, 2) consider engaging with Galli’s book. I have done the first and will consider doing the latter in August once the book arrives on the shelves (or on the Kindle app). As a side note, the cover design for Galli’s book is appalling. Go ahead and redesign the book before its release date, please!