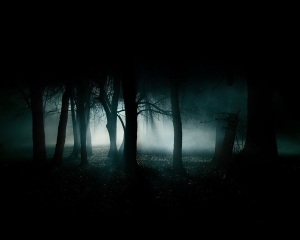 Deeply embedded within the forest of Antivia, there was one who lived isolated from the rest of those in the land of Thorenfield. No one knew exactly where he lived within that vast forest. And most had never seen him face to face, aside from only a handful. But they say, if you listen closely enough, tune your ears just after dusk as the sun has fallen below the horizon, one may be able to hear his haunting screams…

He had fallen asleep late in the afternoon as he lie out in the grass, a bit too close to Antivia, some might say. He had been daydreaming as usual.

He began to rub his eyes, looking around, the mist of his breath filling the cool evening air.

What just happened, he thought?

He looked over his shoulder, just slightly, peering into the vast wooded area of Antivia. His heart began beating with more intensity, his pulse heightening.

Did I just hear something? Could that have been?…his mind rushing.

And at that moment he heard a rustle in the leaves.

His head darted to the left, following the sound.

Then, something caught his attention, out of the corner of his eye. Again, his head spun quickly, heart beating even more rapidly, sweat beginning to bead on his forehead.

He rose from the ground as quietly as possible, his eye steadily on the brush in front of him. He began to back away from the forest step by step, and as he did, there he saw the man of Antivia.

The man was rather hairy, bearded face, covered in some kind of loincloth, his appearance quite unkempt. There were scarred marks on both his arms and chest, fresh blood peering out of a few.

The second that Yorund saw the man, he pivoted on his right foot and darted back towards Thorenfield. This, quite possibly, was the fastest he had ever run. Yorund thought his heart was going to explode out of his chest, and as he continued to sprint towards his home, he began licking his lips due to the overwhelming dryness of mouth.

Yet, as Yorund ran for his life, the man of the forest of Antivia stood at the edge of the tree line, his eyes fixed on the boy.