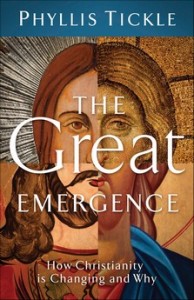 A couple of week’s ago, I finished a very thought-provoking read – Phyllis Tickle’s The Great Emergence: How Christianity Is Changing and Why.

I suppose some evangelicals would not look to run out and grab Tickle’s work (doesn’t that sound weird to just refer to her by her last name?). Tickle has been part of the emerging-emergent conversation, working alongside other figures like Brian McLaren, Doug Pagitt and Tony Jones. These names do not always bring a smile to the evangelical fold. Some might even label such people outside the fold of Christianity.

While I don’t agree with everything that comes from the emergent or emerging table, with the same holding true of Phyllis Tickle’s book, I would highly recommend church leaders (at least church leaders in America and the west) taking time to engage with this book. I think it has some interesting insights into an overview of church history and with regards to what is happening today as we have entered a mainly postmodern framework within the 21st century.

In the opening chapter of the book, Tickle starts off with these words:

These questions are very BIG questions, meaning they can’t be fully answered in what might seem as a short work of 176 pages. But they are important questions to ask and consider. Hey, emergents are good at asking questions, i.e., like McLaren in his A New Kind of Christianity: Ten Questions That Are Transforming the Faith.

Hopefully most are aware that the church is currently going through a transition. Now, honestly, the church is always in transition. As the reformers declared a half-millenia ago – semper reformanda – meaning forever reforming. The church is forever being changed – in character, in practise and in beliefs. Not in the sense of a relativistic-we-can-never-know-anything perspective. But, whether we like it or not, we are headed towards the ever-high goal of full unity and maturity (i.e. Eph 4:11-13). And we are just not there yet.

Of course, some might see present changes within the context of the church as unhealthy, even heretical. And in some measure, I would agree. We would be foolish and immature to swallow all things. But I am convinced those changes that are truly good and healthy, truly of the kingdom rule of God, will remain. And all else will be shaken and fall to the wayside (i.e. Heb 12:26-29). God promises such.

But what I do recognise is that we have to give time. We have to be willing to wait things out. We cannot put this in a microwave and nuke it for 3 minutes. We must give time.

But change is hard. Change is challenging. Change makes us uncomfortable. Especially if we are called to join the change. And, as I said, the church has always been in change. It is our lot in this age.

Obviously you can see the play on the word ‘great’ with these four periods.

One might not agree with the outcome of some of these periods of change (i.e. what Pope Gregory did). But, nonetheless, they were significant events of change for the church at large.

And, even more, Tickle notes that each of these came along about every 500 years.

Again, some might question why we focus on Gregory the Great, though she shares why in the book. And some may want to highlight we have gone through many other changes than these four. What about the Enlightenment? What about the Pentecostal movement of the early 1900’s? Etc, etc.

She recognises each of these. Tickle simply focuses in on these 4 major changes and notes how they are all separated by an almost even 500 year period.

Thus, this gives rise to her thesis that we are now in another great period of change in the church (and world). The Great Emergence of the 21st century. The church is dealing with issues and situations appropriate to its day and time. It’s not like these issues have never arisen – the role of women, what about same-sex relations, how do we understand sola Scriptura today, etc. But these issues are at the forefront of much thinking, writing and reading.

Hence, I believe this is a book that is worth engaging with, especially for those who are church leaders. It is not that we might swallow every line fed to us. But it is that we might be willing to engage with those who are at the forefront of some of the discussions and conversations of change through which the church is currently walking.

Again, time will only tell what is of the kingdom and what isn’t. I am convinced, as Jesus taught, that the gates of hell cannot prevail against the true church (Matt 16:18). Those who are his, empowered by his Spirit, will not succumb to false teaching and practises. They will follow Christ through it all.

Yet, I would encourage my evangelical brothers and sisters who are willing to take up this book that we not come to it with an already critically formed opinion of what Phyllis Tickle will say. If that is our starting point, it’s best that we do not pick up the book.

So, if we can come with the mindset of engaging with the book, I think it will do us well, even as we all might walk away with some critique of the book. As I said, I didn’t agree with everything stated. And another challenge to Tickle would have been that the book simply looks at ‘The Great Emergence’ from an American and western perspective. True, the church in this part of the world does seem to affect the rest of the world. But, I suppose we also need to hear from Africans, Indians, Asians, Hispanics, etc.

There you have it. My review of Phyllis Tickle’s, The Great Emergence.