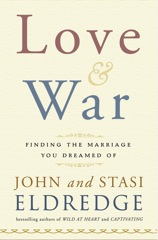 Back in March, upon finishing the well-known marriage book, Love and Respect, I shared my thoughts in a book review. Well, a couple of months back, I also finished the newly released book of John Eldredge and his wife, Stasi (yes, this book review is a little late). It, too, is on marriage and, interestingly enough, it is entitled Love & War. Quite contrasting book titles, eh?

John Eldredge is head of Ransomed Heart Ministries located in Colorado Springs, Colorado. I personally haven’t shied away from sharing my more favourable comments on John Eldredge’s books. Sure, there are things you could nit-pick at (though a few would make a big deal about some of the smaller issues). But, overall, I do appreciate the core of John’s message.

Again, I’ve heard the more negative comments – from Eldredge being labelled an open theist to the dismissive attitude towards his books because they continually focus on life in the rough outdoors. Yeah, he does emphasise the outdoors in a more ‘manly’ perspective. But, while I am more comfortable with a book and cup of coffee inside, I appreciate his focus on getting outside into creation (for Eldredge argues man was created outside the Garden and then placed inside the Garden; see Genesis 2:7-9).

And I think he would agree that not every man is going to be as enthralled about mountains and rivers and animals as he. Oh, and on the open theist accusation, I would say 1) it’s not that big a deal for me and 2) I crack up at the fact that some accuse him of such.

So Love & War is the Eldredge marriage book (they have more stuff to go along with the book here). In previous years, John has released two books sharing his thoughts on the heart of man (Wild at Heart and The Way of the Wild Heart, which is now retitled Fathered by God), while he and his wife together released one on women (Captivating). But now they have joined forces in releasing this newest work on marriage.

This book is quite a lot different in format from Love and Respect. Both books should be appreciated, as they both have their own strengths. But, whereas Love and Respect is more formulaic in its approach, Love & War seems to be more about the Eldredges sharing the journey of their own marriage and imparting wisdom that they have received along the way. And they have had plenty of up’s and down’s (considering divorce a two different points).

And that is one of the things I appreciate about this book, and all of their books. The personal stories, their own real-life journey of which they give glimpses into it. Of course, in Love and Respect, author Emerson Eggerichs shares personal stories of he and his wife’s marriage. But they do not seem as deep and as personal as that of the Eldredge’s.

Of course, in getting personal, John and Stasi also take up the challenge of writing a chapter devoted to sex, which is found in the next to last chapter. Though the two get personal, I don’t believe they overstep any boundaries (though it might leave a few blushing here and there).

I believe one of the greater parts of the book comes in chapter 9, entitled The Little Foxes. In this section, the Eldredges speak about what they identify as agreements. These are particular lies that we believe about ourselves. Actually, they are lies we have agreed to believe about ourselves, hence, agreements. The lies we believe come through the words of others, our own perceptions of ourselves, or flat-out lies from the enemy himself. And, after hearing these lies for some time, they easily become strongholds embedded deep within us. Thus, to be freed from them, we have to take up warfare through prayer, prayer together as covenant partners, recognising them as the lies they are, declaring the truth of God as we hear from Him, and breaking (or renouncing) these agreements.

To some, this will sound either too psycho-analytical or super-spiritual. I understand. But I think these are some things worth considering, especially noting how we, in the ‘western world’, can easily forget that all of life is spiritual, not just certain aspects. And I suppose Satan would love nothing better than to destroy marriages, since the family unit seems integral to everything that is kingdom-oriented. Hence the need to be alert and not unaware of the enemy’s schemes (2 Corinthians 2:11).

They also share their wisdom on how to address the agreements we recognise in one another as covenant partners. It isn’t about heading straight in to the battlefield saying, ‘Honey, you believe a lie and have made an agreement. Let’s address it.’ One can only imagine the offense that could so easily be taken up. There is wisdom, there is grace, there is a call to hear what God is saying and doing in the midst. And, at times, we don’t address such immediately because we need to become clear on what needs addressing. We might think one thing, but such is only on the surface. Hence the need to hear God.

The book was not life-transforming for me. I’ve read some of these thoughts before, which run like a thread through the many other books they have released. But, still, it was good to read. It was honest, it was real, it was personal, and it addressed things that might not show up in your average Christian book on marriage.

So, while I would recommend both Love and Respect and Love & War to those interested in books on marriage, I would begin with offering Love & War. Yet, having said that, recognising that the Eldredges speak more to an American audience, I just might offer Love and Respect first to those outside America. But, from a personal perspective, I’d recommend the Eldredge’s journeyed-perspective on marriage.