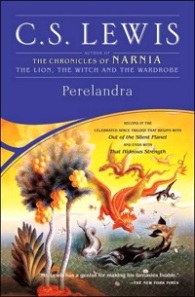 Recently, I finished the second book of C.S. Lewis’s The Space Trilogy entitled Perelandra. A few weeks ago, I posted some thoughts as I had reached about the half-way point, but I wanted to share some final words now after completing the book. And, if you are interested, I also shared my thoughts on the first book of the series, Out of the Silent Planet.

This is my first time to read through this particular series. I did not grow up a Christian, so I would not have read books like The Space Trilogy nor others such as The Chronicles of Narnia. Therefore, in one sense, I am playing a little catch up on some of the classics of Christian fiction.

I wish I could think of such interesting names for a deeply-mythological fiction series.

Soon after Ransom’s arrival to the planet of Perelandra, the reader begins to realise that he is in a world that has not yet experienced sin. Or, in the traditional evangelical language, Perelandra exists in a ‘pre-Fall’ state. Yet Ransom’s old nemesis, Weston, soon arrives as a kind of serpent-like tempter. His main role is to bring down the Eve-like figure of Perelandra, she being known as the Green Lady.

Interestingly enough, Weston develops into quite the extraordinary evil character, and from then on he is referred to as the Un-man. Ransom sees himself as a provision to the Green Lady to assist her in not succumbing to the temptation of evil incarnate. As I mentioned in my previous article on this book, whereas on Earth the temptation was to eat the fruit of the tree of the knowledge of good and evil, here on Perelandra the temptation is to get the Green Lady to live upon the Fixed Land rather than the islands that float upon the water.

[Note: spoiler coming forth for the ending.]

In the end, Ransom is able to defeat Weston, the Un-man, and the first temptation of Perelandra is averted and, thus, disobedience and sin are kept at bay. With such a conquering victory, the book ends with a coronation ceremony of the man and woman of Perelandra becoming King and Queen.

All of the celestial beings – from the eldila (angelic beings) to the Oyéresu (plural of Oyarsa, which are presiding angels) – and the animals of Perelandra join in for this festive celebration. These words describe what has happened:

Now, don’t get the wrong idea. Lewis is not suggesting with the phrase, ‘the greater thing happened’, that it was good that sin entered our world. But he is recognising that redemption through Jesus Christ is quite a fantastic thing, even somehow a ‘greater’ thing. It was avoidable through resistance of the temptation. But, with sin and death entering in to our world through the disobedience of the first Adam, such an awesome thing as redemption has now taken place.

Oh, to imagine what it would have been like if sin and death had never entered our world. Oh, to ponder the possibility. Well, we are headed towards a day when it shall be as if sin had never taken place. All of creation will be redeemed, for it still cries out for such a day!

But here is what caught my attention the most from Perelandra.

As the book nears its conclusion, a conversation takes place between Ransom and the King, Tor. It goes something like this:

Tor the King stared at him.

‘The end of your world, I mean,’ said Ransom.

‘Splendour of heaven!’ said Tor. ‘Your thoughts are unlike ours. About that time we shall be not far from the beginning of all things. But there will be one matter to settle before the beginning rightly begins.’

Tor goes on to explain that there will be a siege upon Thulcandra [Earth], led by Maleldil himself, to defeat the Dark Lord, the Black Oyarsa.

Tor goes on to exclaim:

‘I do not call it the beginning,’ said Tor the King. ‘It is but the wiping out of a false start in order that the world may then begin. As when a man lies down to sleep, if he finds a twisted root under his shoulder he will change his place – and after that his real sleep begins. Or as a man setting foot on an island, may make a false step. He steadies himself and after that his journey begins. You would not call that steadying of himself a last thing?’

One of the Oyarsa present at the coronation goes on to explain that this beginning will be entering into the Great Dance that has been going on for all eternity.

‘The Great Dance does not wait to be perfect until the peoples of the Low Worlds are gathered into it. We speak not of when it will begin. It has begun from before always. There was no time when we did not rejoice before His face as now. The dance which we dance is at the centre and for the dance all things were made. Blessed be He!’

This sounds a bit similar to some thoughts that come out of perichoresis theology, which looks at the inter-relational nature of the Trinity, specifically calling all of creation to join in the dance of the Father, Son and Spirit.

But, more than anything, to recognise that ‘the end’ is not really the end but the real beginning seems a much better approach with regards to our eschatology. For it is not about this earth being done away with, nor our physical bodies being completely put away so that we can be free ‘spiritual beings’. Rather this is all about the renewal and restoring of the created order. We taste of the new creation now. Jesus is even now making all things new. But one day all things will be completely and finally renewed, restored, made right. We will be part of a cosmos in which we were always intended to be a part of.

I think that is a healthy view of ‘last things’, or eschatology. Heaven and earth will collide and become one, bringing about a real and new physical earth in which righteousness will dwell forever. That brings hope, that stirs vision, that encourages patient endurance until that day is initiated at the return of Bridegroom.

8 thoughts on “Perelandra and the Beginning”