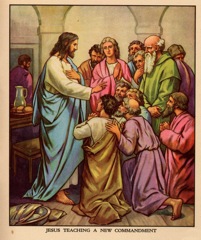 I guess it is time to move on into the more ‘debatable’ issues with regards to my current series on the Ephesians 4 ministry gifts, based out of the passage of Ephesians 4:7-16. Here are some of the summary thoughts so far from past articles:

But, let’s be honest, the question really is this: Does Christ actually still gift people in all five of these ministries today, especially as apostles and prophets?

In answering this question, we need to look at some specific Scriptures, as well as handle some of the objections that could arise. In doing so, I’ll start with the ministry of apostle.

The problem with stating that one believes apostles still exist today is that there is so much baggage that comes to the forefront of people’s minds with such an assertion. I mean, if we really believe apostles (and prophets) exist today, we have a lot of questions to deal with, not to mention a lot of unhelpful and unbiblical practices from those claiming to be apostles and prophets today. Could this ever look like what God intended, you know, looking like the great apostle and prophet – Jesus?

So, in the forthcoming articles, I will approach the topic in this order:

Apostles in the New Testament

When most people think of New Testament apostles, the usual thought that comes to mind is that there were only the twelve, or we possibly remember to include Paul. But, in actuality, there were a few more apostles than just the twelve, or the thirteen (the twelve and Paul). Let’s look at the apostles from the first century, or at least those we can learn something about from the New Testament Scripture:

The twelve (including Matthias who replaced Judas Iscariot)

Together, this group had a very special and unique role in the beginning with the church. We might even say they had a role unlike any other, even unlike Paul.

Of course there is more to discuss with regards to their role (and the other New Testament apostles we shall mention). But, suffice it to say, we can start by all agreeing that these twelve were very important and foundational as apostles.

Some might not actually realise this, but Paul was not a part of the original twelve. Ok, anyone who reads this article knows this, but it is interesting to listen to our communication. We speak of ‘the twelve’ as if they were the only apostles. But they weren’t, right?

I am aware that, at varying times, some have tried to teach that Paul was actually God’s better choice to replace Judas Iscariot, rather than Matthias. This is because, in Acts 1:26, we read that the eleven had cast lots for help in making the decision for replacing Judas. Therefore, some would point to this act as very unspiritual and that Paul would have been the proper replacement if only they had waited for the outpouring of the Spirit at Pentecost.

But such is a very weak case. From a Jewish perspective, casting lots was not without warrant, as the they believed God was in control of the lots (see Proverbs 16:33). Plus, the prayer of the eleven found in Acts 1:24-25 shows quite clearly who they were seeking and trusting in.

Proponents that say Paul should have been part of the initial twelve will also point to another passage in support of their case:

This verse is used as a proof-text that Paul, though an apostle, had not been in a place to be included with the twelve since he was ‘one untimely born’. Thus, again, if the twelve had only waited, and not cast lots for the decision, it would have been made clearer to them that Paul was to be the twelfth and final apostle. But such a claim is only conjecture without much substance.

Matthias was the God-chosen replacement, as we see in the Scripture passages above. He was the one to complete the all-important team of the twelve apostles of the Lamb.

Even more, such a theory that Paul was the better choice to complete that first circle of twelve is shown as forced when we realise there were actually more apostles than the twelve and Paul. So, let’s move on.

This is the first person that many do not realise was an apostle:

But when the apostles Barnabas and Paul heard of it, they tore their garments and rushed out into the crowd, crying out…(Acts 14:14)

Barnabas and Paul made a formidable apostolic team for quite a while. Oddly enough, it seems Barnabas was functioning in some kind of apostolic role even before Paul. We read about this in Acts 11:19-26. Here we also see that Barnabas probably had an active role in seeing Paul grow and mature. And one can only wonder if Paul learned how to more faithfully function as an apostle through the teaching and encouragement from Barnabas.

Later on, we see Paul and Barnabas’ apostolic commissioning together in the Syrian Antioch church:

1 Now there were in the church at Antioch prophets and teachers, Barnabas, Simeon who was called Niger, Lucius of Cyrene, Manaen a member of the court of Herod the tetrarch, and Saul. 2 While they were worshiping the Lord and fasting, the Holy Spirit said, “Set apart for me Barnabas and Saul for the work to which I have called them.” 3 Then after fasting and praying they laid their hands on them and sent them off. (Acts 13:1-3)

With regards to Paul’s calling as an apostle, many believe that when he saw Jesus on the Damascus road (Acts 9:1-9), this was not only his conversion, but also his apostolic commission. Now, there is no doubt that the substance of his calling could have somehow been made known at that time, and especially when Ananias showed up to lay hands on him for the regaining of his sight and being filled with the Spirit (read the Lord’s words to Ananias in Acts 9:15-16).

But it’s also interesting to read the words of Acts 13:4 – So, being sent out by the Holy Spirit, they went down to Seleucia, and from there they sailed to Cyprus. That’s it! They were sent out by the Spirit of God. And, of course, that’s what it means to be apostolic. As I stated quite a few times early on in this series, the word literally means, ‘sent one’.

Of course, not every missionary or ‘sent one’ is an apostle. But that is part of the core of what it means to function in the ministry of apostle. Hence, the Spirit sent out Paul and Barnabas as an apostolic team. An apostle is aware of his apostolic commissioning, that being why they were sent out.

And it seems that, in Galatians 2:9-10, we see James, Peter (Cephas) and John confirming Paul’s and Barnabas’ calling. Therefore, Barnabas had an instrumental apostolic gifting and ministry, and maybe even before Paul ever really functioned in his apostolic role amongst the early church.

James, the brother of Jesus

James, the physical brother of Jesus, was also an apostle. We can see this from Paul’s words when he recounts his visit to Jerusalem in his letter to the Galatians:

But I saw none of the other apostles except James the Lord’s brother. (Galatians 1:19)

It is also possible that 1 Corinthians 15:7 is a statement about the apostolic calling of James, but it matters little knowing the statement in Galatians 1:19. Along with Peter and John, we see that James had a major role in the first local church in Jerusalem (Galatians 2:9). This is also shown through his role in the Jerusalem council of Acts 15:13-21.

Now, for students of the word, it will not have been hard to remember and recognise the apostolic ministries of people like Barnabas and James, even though they were outside of ‘the twelve and Paul’. Of course, some might say, ‘Well, yes, James wrote Scripture. Thus, he was an apostle.’ But what about Barnabas? We are not sure he wrote anything in Scripture. He could have possibly written the letter to the Hebrews. But we are not certain.

And this is where I believe we can start to get off course with regards to what an apostle is and what it means to function in an apostolic ministry. There were not just twelve apostles. Nor were they first and foremost called to record Scripture. Of course, some of the twelve did, and some others outside the twelve did write what we now have in the God-breathed canon of Scripture. I do not negate the importance of such an act.

But this is not really the essence of what it means to be an apostle, to be apostolic. Remember, an apostle is first and foremost a gifting and serving ministry (since serving and ministry are synonymous in the Greek). Apostle is not a title. Thus, we can get side-tracked with simply equating apostle as a Scripture-writer. But I jump ahead just a little.

And for those who want to solely focus on twelve, we must not forget that Paul was not part of the original twelve. Not only that, but we must recall to mind James and Barnabas. All of a sudden, we rather easily see the existence of fifteen apostles instead of twelve. And yes, all fifteen of these would have been apostles, since the fruit of their lives showed apostolic gifting and ministry.

I also believe there were at least another seven to nine people that we see functioning in apostolic ministries within the New Testament text. The game is not – get as many apostles as you can. This is a ministry gift we must take seriously. But, it’s interesting that when we really start honestly looking at the Scripture, we see more than just the twelve and Paul. And there are even more than the twelve, Paul, Barnabas and James. So I’ll pick up those others in the next article as I continue to look at apostles in the New Testament.